It is believed that starting next year, we will see redesigned MacBooks now that Apple has its own custom M1 chip powering its machines and proving quite impressive. A newly discovered patent also suggests that we might see a “reconfigurable” keyboard in those new machines with each key holding its own small display.

Pointed out by Patently Apple, while we will have our usual physical keyboard on their, the each key will have its own small display which will dynamically generate the labels. These tiny displays would be OLED, but not high res. given no such need.

The dynamic labels may be generated using dynamically reconfigurable label displaying components such as organic light-emitting diode displays with arrays of pixels, electrophoretic displays with arrays of pixels, or other pixel arrays (as examples). Configurations in which dynamic labels are presented using lower-resolution configurable output devices may also be used.

It was around last month when we saw a patent discussing the use of Force Touch in the Touch Bar, and now we have this new keyboard presentation.

Interestingly, it appears Apple is looking to use this new keyboard tech not just for the MacBook, but for standalone keyboard as well for the entire Mac range.

Apple’s patent FIGS. 1 and 2 below illustrates that the patent applies to both future MacBooks and desktop keyboards; FIG. 3 illustrates a schematic diagram of the system. 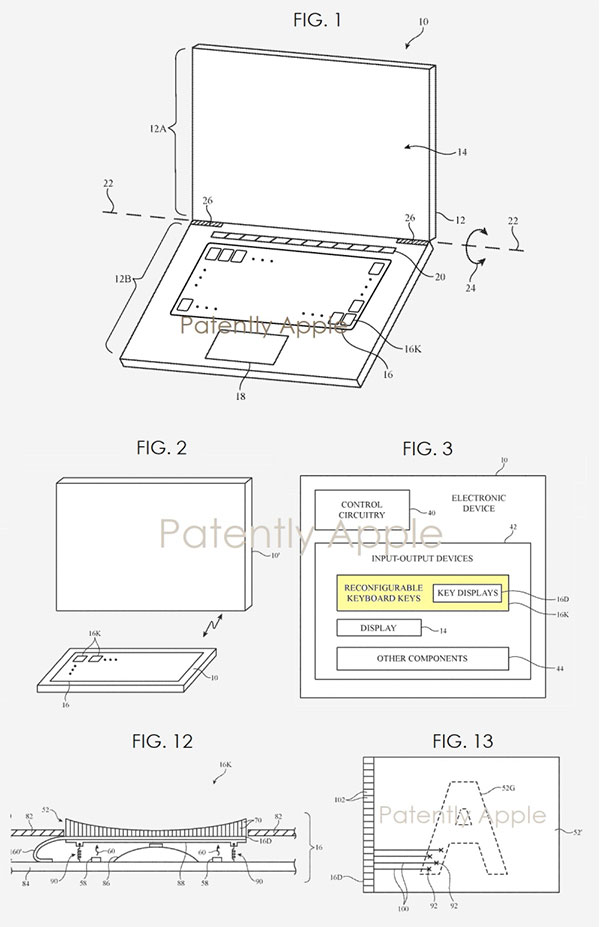 Being able to re-configure the keyboard labels and functions would be a pretty amazing feat. You can configure layout for programming apps, gaming, video / image editing etc.

The key member may be formed from materials such as glass, ceramic, polymer, crystalline material such as sapphire, metal structures, and/or other materials. With one illustrative configuration, which is described herein as an example, some or all of the upper surface of each key 16K (e.g., a key member portion in each key 16K) may include a coherent fiber bundle that overlaps a key display in that key and that allows a viewer to clearly view a key label that is being displayed on that key display.

The construction material though, as the patent suggests could range from a variety of materials.