Apple may have introduced a set of new emoji characters with the introduction of iOS 9.1, but that’s nothing compared to what the new Emoji Keyboard from EmojiWorks will do for you. EmojiWorks’ new hardware-based keyboard has been designed and developed for Mac users with emotive typing via emoji characters firmly in its mind. The keyboard makes it a lot easier for those with an iMac or MacBook to quickly express themselves using their favorite emoji thanks to the built-in shortcut keys.

From an aesthetic view point, the Emoji Keyboard looks very similar to the wireless keyboards that Apple offer as an accompanying accessory to its Mac products. The overall layout of the product and its design borrows a great deal from Apple’s hardware, but that’s really where the similarities end. Each key on the new EmojiWorks keyboard is printed with emoji characters (just one on the entry model) that are accessible as a secondary function of that key. So, as an example, the “T” key on the keyboard also contains a “thumbs up” and “thumbs down” emoji representation. 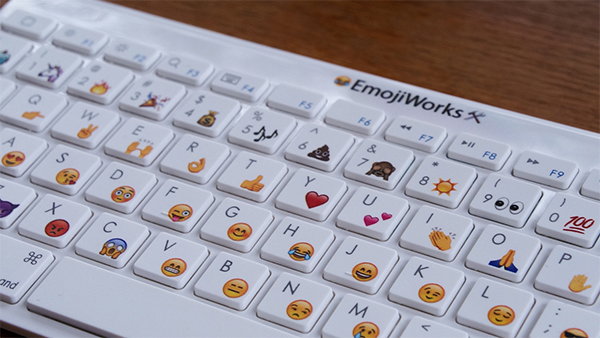 That secondary function is quickly accessed using the dedicated “emoji” button on either side of the space bar next to the familiar looking command button. Press the emoji button in conjunction with the key that represents the emoji that you would like to type, and voila, you have quick and unrestricted access to emotive typing. A lot of the popular characters are immediately available, such as the aforementioned thumbs up and thumbs down, the new purple unicorn, the always popular poop emoji, and even a slice of pizza or the new taco that made an appearance in iOS 9.1. 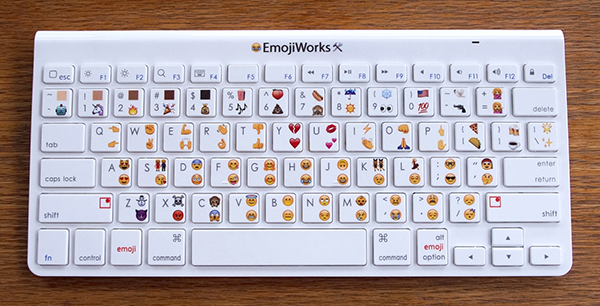 The keyboard itself is powered by two AAA batteries, and is built with integrated Bluetooth, so is capable of functioning with a Mac, iPhone, or iPad. The company behind the product claims that users can expect to find themselves typing emoji up to ten times faster than the usual input methods, but although that is an extremely tangible benefit, the keyboard does come with a trade-off. Because each key is printed with a character, and the underlying functional is hard-programmed, the keyboard is not customizable in any shape or form. 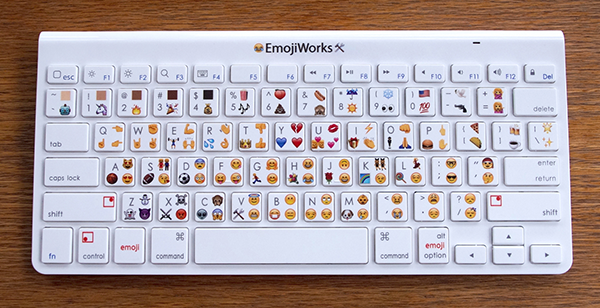