The people who created Siri have been hard at work on an all-new digital assistant, and it is ready to break cover. Viv is its name, and it promises to give Siri some food for thought.

Siri co-founders Dag Kittlaus and Adam Cheyer, along with a 20+ person team have been working on Viv for around four years, and they are now ready to start showing off what they have been working on. From what we have seen, Viv is certainly interesting, even if the team’s enthusiasm may not quite mean Viv is ready to take over the world. 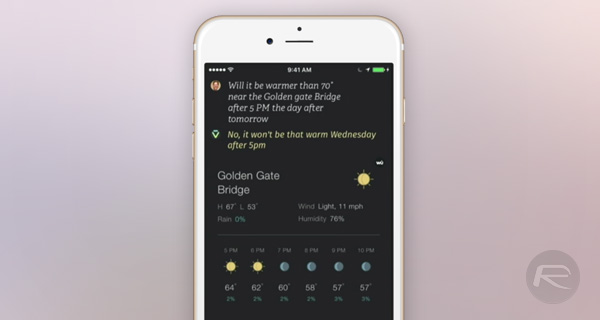 Shown off at TechCrunch Disrupt NY, Viv runs on an iPhone like any other app, and takes questions and input via voice just like Cortana, or perhaps Google Now. Where things start to get interesting is the way Viv takes what it hears and then learns and builds on it thanks to artificial intelligence.

Viv is an artificial intelligence platform that enables developers to distribute their products through an intelligent, conversational interface. It’s the simplest way for the world to interact with devices, services and things everywhere. Viv is taught by the world, knows more than it is taught, and learns every day.

One of Viv’s major selling points is its ability to be tied into other devices and services, with developers able to work with Viv in order to create something that could have us doing even more awesome things with our voices than we are capable of now. If I was going to put my money on one group of people dragging the digital personal assistant forward in its capabilities and promise, it would be the people who created Siri.

Check out the embedded video below in which the most boring of things – the weather – is checked in a couple of strange ways that could have potentially tripped Viv up, but didn’t.

If the current crop of digital personal assistance doesn’t wow you, the next wave may just knock your socks off… I hope.