Once upon a time, Apple would have openly acknowledged that the Apple TV was nothing more than an internal hobby project to test the waters of the set-top box streaming market. Now, with the introduction of the fourth-generation Apple TV hardware, as well as the subsequent introduction of the underlying tvOS and integrated App Store, the Apple TV is looked at somewhat differently as the Cupertino-based company looks to dominate the living room.

Apple has already shown willingness to progress the platform with regular software updates, and has once again shown that willingness by promoting a new “Live Tune-In” feature for Siri that is displayed on the Apple TV What’s New page. The What’s New section of the Apple TV interface also highlights a number of additional features that were introduced as part of March’s tvOS 9.2 update.

The latest Live Tune-In feature that’s being promoted to Apple TV 4 owners is yet another extension of Siri’s capabilities on the platform. The accompanying Siri Remote, along with the additional power and functionality that Siri has adopted with various tvOS updates, clearly shows that Apple feels voice-guided control via Siri is an important interaction method for the Apple TV platform.

Live Tune-In allows owners to instantly invoke and head into a live stream within a specific app by quickly giving Siri a command such as “watch CBS” via the Siri Remote.

From the What’s New section of the Apple TV Settings page:

Ask Siri to start watching a live channel in one of the supported apps, such as CBS, Disney XD, and ESPN. Try Saying “Watch CBS” or “Watch ESPN Live.” 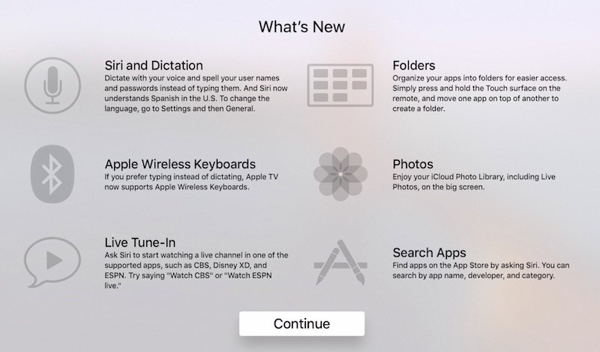 Apple is directly promoting CBS, Disney XD and ESPN as part of the Live Tune-In feature, and it’s currently unknown at what rate additional apps will be adopted and added into the Live Tune-In system.

Given the fact that the Apple TV is a relatively immature product for Apple, and tvOS even more so, it’s exciting to see it grow and expand so fast with the addition of new features and functionality on a semi-regular basis.