Here’s a video that shows LG G5 vs Samsung Galaxy S7 Edge real-world speed test comparison. This test should help answer any performance related questions you may have between the top flagship Android smartphones of 2016.

The first thing to take into consideration here is the specification of each device. Both the Samsung Galaxy S7 Edge and the LG G5 here are the United States variants, meaning that they both are being powered by a Qualcomm Snapdragon 820 series processor. Both smartphones contain an embedded 4GB of RAM, both render visuals at the same resolution of 2560-by-1440, and both are running Android 6.0.1. If you take the name of these devices and how they look out of the equation, then you have an exciting test between two practically identical pieces of hardware from a technical perspective. 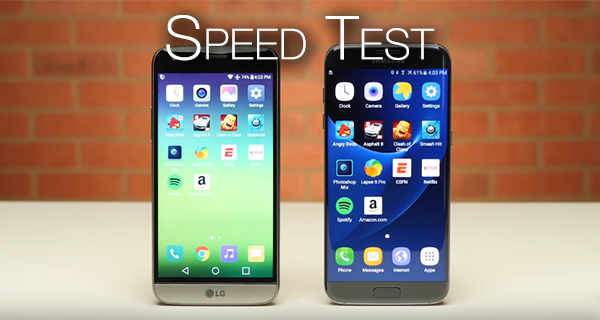 The real difference here will be how each manufacturer has tweaked the underlying software to get the most out of the hardware. Apple is undeniably king of getting the most out of hardware through a marriage with software, but who is heir to that throne between LG and Samsung?

As seen in the past, the two phones are run through a variety of apps in two laps. It becomes instantly clear when running through the first lap of system and installed apps that the LG G5 looks to be better optimized than the Samsung Galaxy S7 Edge. The first lap of cold loading of apps is finished in 01:27:47 by the G5, a full five seconds quicker than the S7 Edge. 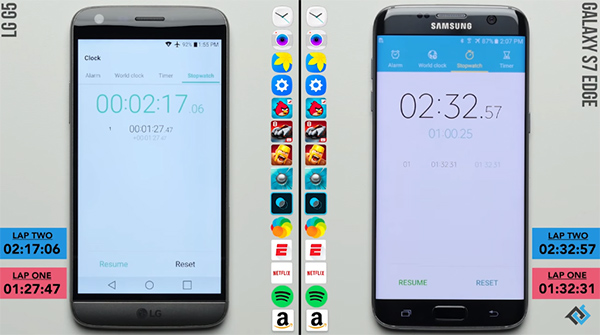 The real test and interesting point is whether or not the G5 is capable of pulling those apps from the background as efficiently as it can load them in the first instance. After running through the same process again as part of the second lap, it seems that LG has definitely been able to get the better performance out of the hardware than Samsung with a second lap that gives the G5 a faster overall time by a staggering 16 seconds over the S7 Edge.

Check out the video embedded below for yourself, and decide if the results will affect the phone that you opt for?