There’s an almost endless list of things to consider when looking to purchase a new smartphone. Consumers these days generally like to keep a particular handset for a minimum of twelve months, with some perfectly happy to extend that to twenty-four, or even thirty-six months if the hardware continues to meet their needs. With that in mind, if you abstract away a lot of characteristics that a device must have to appeal to a broad range of consumers, then you’re generally left with one thing; pure device performance and speed. So how do the industry’s best compare to one another in a speed test? Let this video light your way!

We have 2015-released Motorola’s Moto X Pure Edition, Google’s Nexus 6P, Apple’s iPhone 6s Plus and the 2016-released Samsung’s Galaxy S7 Edge. All four of these smartphones come with their own visual appeal, and contain very distinct aesthetic differences that will appeal to different people. They also come packing very different internal specifications that should set some of them apart from the others. At least that’s the theory. But just how do they perform in real-time? 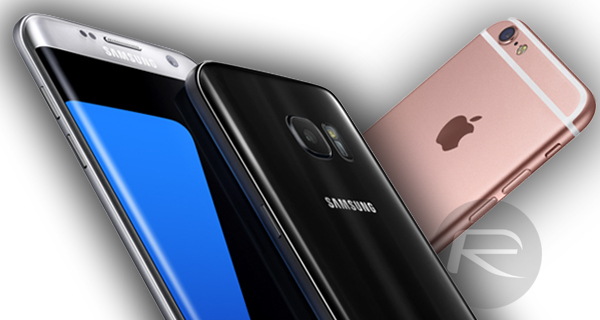 All four devices are set up in as similar a manner as possible. All factory reset and functioning without network SIMs. All four phones only have those apps installed that are relevant to the speed test, while settings are left exactly as they were out of the box. So it’s a fairly even playing field as far as test conditions go, with the only real differentiating factors being how the device’s internals and the OS work together to execute the provided tasks. When running through the initial test of loading and closing apps, you can immediately see that Apple’s A9-powered iPhone 6s Plus jumps instantly ahead of the pack.

The final result? Apple’s iOS-powered iPhone 6s Plus finished two rounds of loading and closing all installed third-party apps – which includes popular titles like Temple Run and Instagram – in a total of one minute and forty-two seconds. The Android-powered Galaxy S7 Edge came in second place, pacing eighteen seconds behind the iPhone. The Nexus 6P and Moto X Pure Edition, both running Android, breached the two minute mark with a time of two minutes and two seconds, and two minute and sixteen seconds respectively. The iPhone 6s Plus may ship with the lowest amount of RAM and a lower-spec CPU compared to other handsets in the test, but it’s clear that Apple’s dedication to marrying the hardware and software together in the pursuit of performance is paying off. 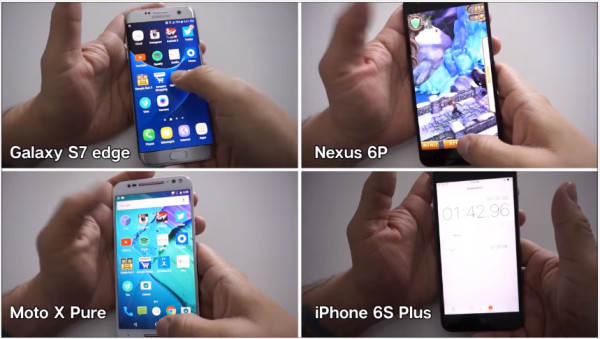 There’s obviously a lot more to a device than simply opening and closing apps with a stopwatch timing how efficient it is, but considering the majority of users deal with installed apps on a daily basis, this real-world speed test is a fairly good indication of how each device not only deals with app launches, but also how it handles invoking that app from the native multitasking system.

This video also proves one more point. When it comes to smartphones, specs on paper are only half the story. It’s the real-world performance and benchmarks that really count.

Check out the video for yourself. Could it influence your purchasing decision?