Purchases from big companies like Apple, Google, and Microsoft are always popular, but what happens when you pit three smartphones from those companies against one another in a straight up speed test? Carry on reading to find out.

As you might have guessed, this latest speed test video showcases three popular smartphones available on the market today. The nearly three minute long video takes the iPhone 6s Plus, the new Nexus 6P, and Microsoft’s Lumia 950 XL and thrusts them together over a series of challenges to see exactly how performant each is in comparison to the rest across a set of real-world usage scenarios that would impact every day users. 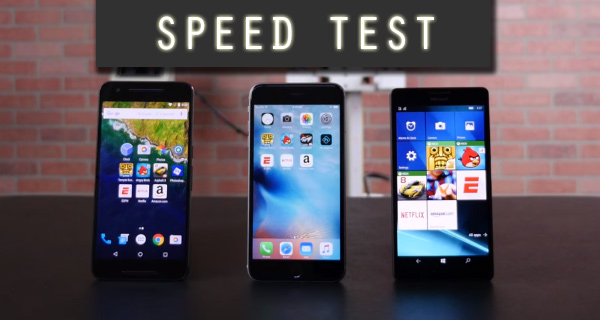 For the comparison, each device has its stopwatch running to time events before jumping into immediately launching and closing each of the native system apps that ships with each device. Obviously these apps differ based on the manufacturer and the underlying operating system, but each device does share some commonalities, such as camera, messaging, and photo apps. Google’s Nexus 6P immediately takes the lead by invoking and closing apps at lightning speed with gorgeous, fluid animations.

The video clearly demonstrates the fantastic marriage of hardware and software that Apple waxes lyrical about on a regular basis as it loads and powers through the starting sequences of Temple Run 2 with blazing speed. In fact Temple Run 2 has already been exit and Angry Birds put into gear on the phone even before the Nexus 6P has managed to move past the initial Temple Run loading screen. Microsoft’s supposed flagship, Lumia 950 XL, is pretty much out of the running at this point, although it does quickly catch up with the Nexus 6P on the next visual obstacle. 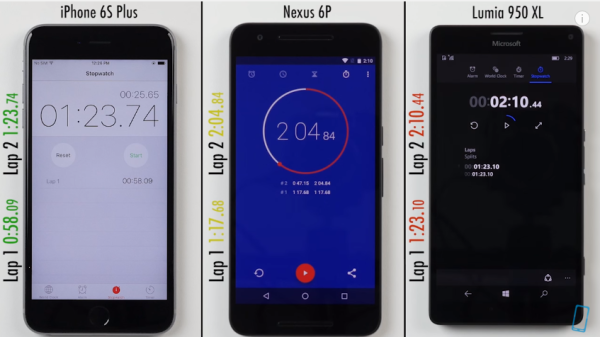 Such is the cruising power of Apple’s iPhone 6s Plus that it manages to finish the first obstacle course with a time of 58 seconds. A full 19 seconds ahead of the second place Nexus 6P and 25 seconds ahead of the Lumia 950 XL. That performance is better put into perspective when you consider that the iPhone took only one minute and twenty three seconds to complete the whole obstacle course, while Microsoft’s Lumia 950 XL had only managed to get past the first round in the same amount of time. The Nexus 6P meanwhile finished the entire course in two minutes and four seconds.