Whenever a new smartphone is introduced by one of the big hitters in the market, the immediate consumer reaction is generally “how fast will it perform?”. If consumers are going to upgrade to a newer version of their smartphone, then they expect a noticeable level of improvement over the former model, and generally want it to perform better than the competition. When Apple introduced the iPhone 6s and 6s Plus, the initial benchmarks tests produced significantly better results than that of the competition, which primarily included Samsung’s flagship devices. But what about a real-world, semi-scientific, head-to-head test between the iPhone 6s Plus and Samsung’s Galaxy Note 5? There’s a video just for that.

You may remember that when the iPhone 6s and iPhone 6s Plus were finally available for the public to purchase just last week, we discussed how the hardware, which ships with 2GB of RAM, managed to significantly outperform supposedly higher spec devices in a series of benchmark tests. The devices in question were Samsung’s Galaxy S6, Galaxy Note 5, and a host of other popular devices running on the Android platform. Granted, these were only benchmark tests, but it still made for an impressive reading. Meanwhile, AnandTech’s detailed benchmarking has already crowned the iPhone 6s/6s Plus as the fastest smartphones in the world for now. 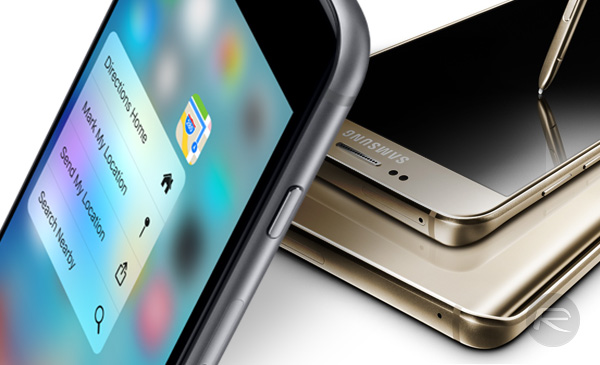 Now that we’ve had the devices around for a while, we can actually take a look at how Apple’s new iPhone 6s Plus stacks up against Samsung’s Galaxy Note 5 in a real-world performance test. As we’ve seen with previous tests of this nature, in order to keep things as even as possible, and to try and get an accurate portrayal of just how these devices perform against one another, both smartphones are put through a virtual obstacle course. The first lap tests each phone’s ability to load applications, while the second lap tests each phone’s multi-tasking capabilities. The lap times are then added together to produce an overall time.

It immediately becomes apparent from the first lap that Apple’s iPhone 6s Plus with 2GB of RAM is more performant than the Galaxy Note 5 with double the RAM (4GB). When viewing the devices side-by-side, and watching the apps load and exit, it looks as though the 6s Plus is way ahead of the Note 5. However, the end lap time shows that it’s actually a lot closer than the visuals suggest, as the iPhone 6s Plus notches up 49 seconds, with the Note 5 coming in close behind with 51 seconds. 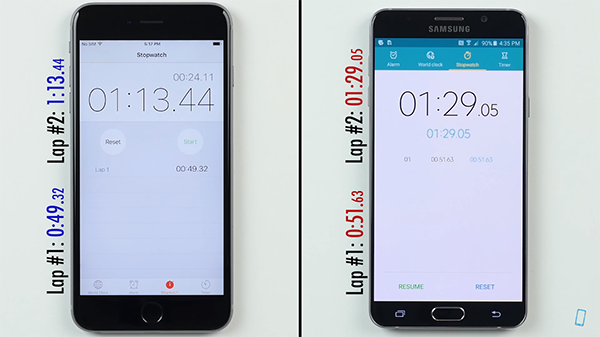 Multi-tasking is where the Android-powered Galaxy Note 5 lets itself down. Apple’s iPhone 6s is able to perfectly handle multi-tasking by already having the previously launched apps waiting in the background ready to invoke without any lengthy loading times. The Note 5 on the other hand simply is not capable of that level of speed, even with 4GB of RAM. When crossing the final hurdle, Apple’s latest flagship smartphone finished a whopping sixteen seconds ahead of Samsung’s 2015 flagship.

You can check out the video, right below.