A lot of smartphone owners who choose to let Apple handle their needs with the iPhone, generally do so because they love the quality and innovative nature of Apple’s hardware and engineering processes. Even if you don’t necessarily like the iPhone, it’s difficult to argue against the build and manufacturing quality of Apple’s premium devices. With that said, another real tangible benefit of being an iPhone owner is the fact that Apple is continually updating and attempting to improve iOS with regular updates. iOS 9.3.1 is the latest publicly available version of that platform, but how does it compare to iOS 9.2.1 in terms of speed, and does it offer battery efficiency improvements? Find out in this newly released video.

We’ve already been privy to a battery life comparison video test that pits iOS 9.2.1 against iOS 9.3.1 on a range of Apple iPhones. This time around, the test is related to the speed of the individual firmware versions, but also contains a side-by-side battery test at the end of the video. The difference being here that the comparison tests are run purely on two brand new and latest iPhone 6s handsets that have literally been pulled out of the box and have zero wear on the internal batteries instead of older-gen iPhone models shown in previous video tests. 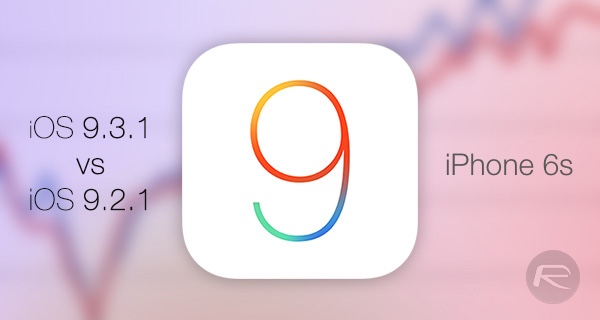 As most of these types of video do, both devices are put side-by-side and ran through a process of invoking some of the stock apps to see how fast they load and ready themselves on the different versions of iOS. This includes opening up and loading conversations in Messages, setting up and running through a yearly diary in the Calendar app, as well as flicking through photographs in the Photos app.

We don’t have the exact scientific launch times associated with each app on each firmware version, but from a visual perspective you can see that iOS 9.3.1 is just slightly faster. The two phones are also benchmarked using Geekbench 3, and the results aren’t that different with iOS 9.3.1 gaining only a marginal lead over iOS 9.2.1.

That trend continues throughout the speed test part of the experiment. The battery test portion actually seems to show that iOS 9.2.1 is slightly more performant and efficient than Apple’s latest iOS 9.3.1, albeit marginally with the iPhone 6s running iOS 9.3.1 dying just a few seconds before the iOS 9.2.1-running iPhone gives up and shuts down.

Check out the video embedded below for yourself and let us know what you think.