Apple released iOS 9.3.1 last week as a response to some users finding that their devices would freeze or crash on interaction with links on iOS 9.3. There is even a build of iOS 9.3.2 now currently in testing by developers. Apple is clearly going to keep pushing new updates out at a rate of knots, and that can only be a good thing.

When Apple does release a new version of iOS, people inevitably start asking questions about whether they should upgrade, with battery life often one of the key reasons that someone either will, or will not upgrade at all. It’s difficult to say whether a newly released version of iOS will offer better or worse battery life due to the sheer number of variables involved, but that doesn’t stop people from trying. 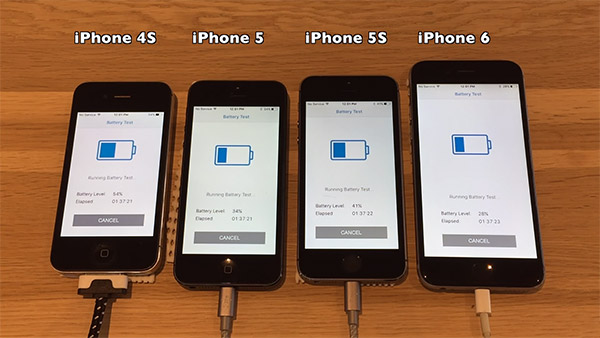 And so here we are comparing iOS 9.2.1 to iOS 9.3.1 in order to see which is capable of performing best in a Geekbench battery life test. In order to get the best possible range of results, iPhones from the iPhone 4s all the way up to the iPhone 6 were tested, with the results taking hours to gather but distilled down into a ten-minute video.

As far as semi-scientific tests go, this one by iAppleBytes is certainly thorough.

First we charged all devices to 100% let them sit in the charger for an additional 30 minutes. Ran Geekbenchs test on all devices until the battery died, and filmed every wonderful moment.

We did this on iPhone 4S, iPhone 5, iPhone 5S and the iPhone 6. Using the same physical device to ensure the same battery life, first on iOS 9.2.1 and then again on the same device upgraded to iOS 9.3.1.

The results? As you might expect, iOS 9.3.1 performed best as far as pure Geekbench scores go, though iOS 9.2.1 does perform slightly better in pure time taken for a battery to fully drain. We’re not sure why, but there you go.

Of course, upgrading to iOS 9.3.1 is not just a decision to be made about battery life. Plenty of other fixes went into the latest version of iOS compared to 9.2.1, and so if you don’t care about jailbreaks, we’d suggest updating without delay.