The passion within the jailbreak community was reignited big time with the surprise launch of the iOS 9.1 Pangu jailbreak tool by the Chinese-based jailbreak team in early March of 2016. Just like the original Pangu 9 jailbreak tool for iOS 9.0.x firmwares, this solution landed literally out of nowhere. Not that anyone is complaining now. It’s all well and good having this Windows PC and Mac compatible tool for iOS 9.1, but it does raise the immediate question in the mind of those waiting for next jailbreak on “what’s the current state of an iOS 9.3.1 and 9.3 jailbreak?”.

Apple released iOS 9.3.1 to patch a bug related to how universal links worked in iOS after iOS 9.3 randomly started crashing devices whenever links were tapped in Safari and other apps. 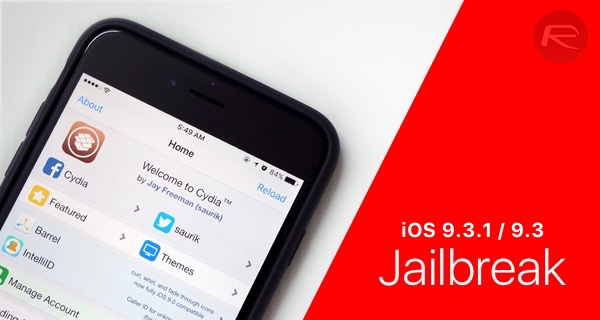 But now that we have iOS 9.3.1 available for download, is a jailbreak available or coming for it? Well from security perspective, not much has changed in iOS 9.3.1 compared to iOS 9.3. Apple’s security updates page doesn’t list any further changes for iOS 9.3.1 which means whatever vulnerabilities Apple patched in iOS 9.3 remains as is in iOS 9.3.1. So technically, if there’s an exploit out there which worked in iOS 9.3, it should work on iOS 9.3.1 as well.

Now those of you who follow our regular jailbreak updates closely will be aware that Italian developer Luca Tedesco has been involved in a lot of activity of late. That involvement included successfully jailbreaking and posting a video showing jailbroken iOS 9.3 on an iPhone shortly after Apple’s initial release of the first iOS 9.3 beta. The video evidence coming from the Italian shows that iOS 9.3 and possibly iOS 9.3.1 are both capable of being jailbroken. The problem though is that he has a number times made it clear that his exploit is private and he doesn’t plan to release it as a public jailbreak.

So where does that leave us? Chinese jailbreak teams Pangu and TaiG usually don’t provide any updates prior to a release. At least that is how it has been with their recent jailbreak releases. At this point in time with iOS 9.3.1 out and the latest Apple devices, iPhone SE and 9.7-inch iPad Pro available in stores, we can only hope that they have something cooking for jailbreak community and will release once it’s ready for primetime.

So then should you update to iOS 9.3.1? Well if you are on iOS 9.3, you probably should because iOS 9.3 has a nasty universal links bug and updating to 9.3.1 shouldn’t hurt your chances of jailbreaking in future as iOS 9.3 and 9.3.1 are essentially same from security perspective, as also explained earlier. If you are on iOS 9.2.1 though and care a lot about jailbreaking, you should probably stay there and wait for a potential jailbreak release. If there’s anything the recent release of iOS 9.1 jailbreak has shown us, it’s to stay on as low firmware version as possible and wait patiently for the next jailbreak release. Also, since iOS 9.2.1 is still being signed as of this writing, you can downgrade to it from iOS 9.3/9.3.1 now if you want to. Once the signing window is over, downgrading from iOS 9.3/9.3.1 to 9.2.1 will no longer be possible.

As always, we will keep bringing you latest updates on the jailbreak front as soon as we hear more on it. Stay tuned.

Update x3: Apple has stopped signing iOS 9.3 firmware, which means you can now no longer update or to downgrade to iOS 9.3.

Update x4: There’s a fake iOS 9.3.x jailbreak tool by the name of “3K Jailbreak” doing the rounds on the Internet. It claims to be from 3K Assistant team but in reality it’s NOT. Not only is it fake, it can also potentially install malware or viruses on your iOS device or the computer. Stay away from it.

Update x5: Now that iOS 9.3.2 is out to public, we have a follow up post to this detailing the latest in the state of jailbreak. You can read it here: Jailbreak iOS 9.3.2 Status Update [Latest].

Update x7: GSMagic Team has admitted to being fake.