The final version of iOS 9.3 download links are out. Apple has just started rolling out iOS 9.3 IPSW files to all supported iPhone, iPad, and iPod touch devices with a number of new and notable features that have been stringently tested with developers and public beta testers over the last two months.

iOS 9.3 has been in testing since early January, and it was immediately evident that this wasn’t just another periodical update that offered nothing more than bug fixes and general under-the-hood improvements. We may be all set to witness the first developer seed of iOS 10 this coming June, but Apple has clearly tried to make an impact before that with some excellent additions in this latest version of the platform. That’s all well and good from a consumer perspective, but what exactly can iPhone, iPod touch and iPad owners expect to look forward to with this new iOS 9.3 update? 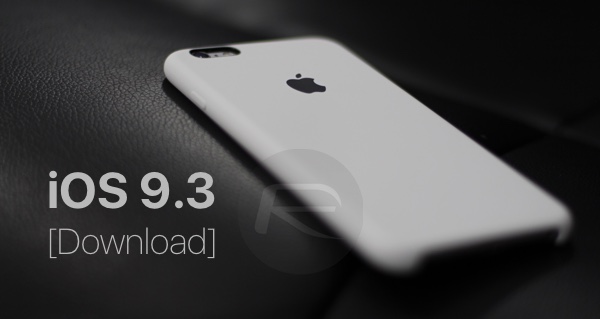 First and foremost in iOS 9.3 features is the introduction of the fantastic Night Shift feature that the company may or may not admit has been “borrowed” from the popular f.lux app. The feature uses the device’s geo-location to automatically shift the display’s hue to the warmer side of the spectrum based on sunset times in that location. This is to combat the intake of blue light in the evening, which has been proven to be the enemy of efficient sleep patterns. iOS 9.3 also brings in a little more love for Touch ID by introducing the biometric and password protection feature directly into the stock Notes app to secure existing and new notes. Besides this, Apple News app has also received some improvements with faster article loading times and more personalized recommendations in the For You section.

In addition to offering a number of “mainstream” features that will appeal to the majority of iOS device owners, iOS 9.3 also brings a few little niche additions. There are additional 3D Touch Quick Actions available now for the stock Weather, Health, Stocks, Compass, App Store, iTunes Store, and Settings.app. Improvements have been made to Apple Music suggestions while a new “Nearby” feature has been added to CarPlay. There’s also third-party fitness app suggestions now within Apple’s own Health app. Those who own an Apple Watch, and who update said Apple Watch to watchOS 2.2, will be able to pair multiple Apple Watches with an iPhone running iOS 9.3.

iOS 9.3 packs a little something special for just the iPad as well; Education, which is a suite of apps tailored specifically for classroom teaching and learning, thus solidifying the iPad as a valuable tool in the school and classroom setup. On an even more niche scale, iOS 9.3 also features a very interesting enterprise style feature that lets IT administrators lock in a specific Home screen layout on an employee’s corporate device, as well as practice additional power like white and black-listing specific third-party apps to allow or prevent them from running on a device.

To grab the OTA update, head to Settings > General > Software Update on your device to download and install iOS 9.3. 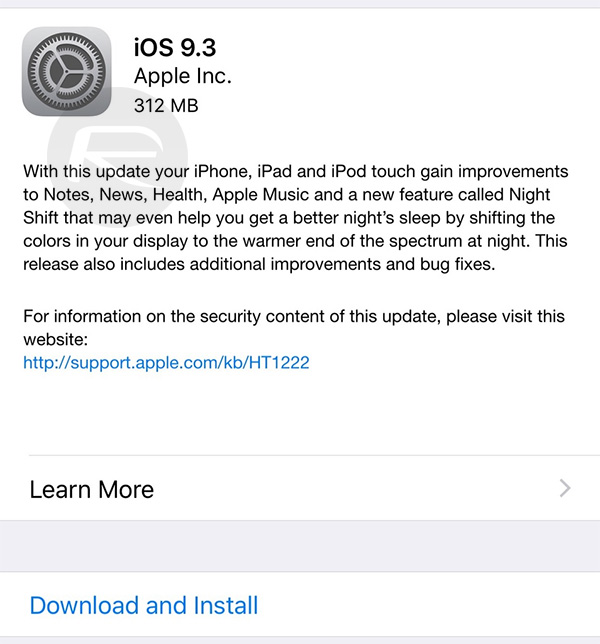 If you wish to have a clean installation of iOS 9.3, you can download the IPSW file for your relevant device directly from the links below and then restore it to your device using iTunes.

Update x2: Download link of iOS 9.3 for iPad 2 Wi-Fi + 3G (GSM) model has been updated to build 13E236. Apple pulled 13E233 for this iPad model after some users reported activation issues following the update and then re-released the update for this model with build number 13E236.

Update x3: Apple has now released iOS 9.3 13E237 for iPhone 5s and earlier and iPad 2 and earlier devices with fix for activation bug. The download links above have all been updated with the latest links of iOS 9.3 for each device.