iPhone SE Vs Every iPhone Ever Made Speed Comparison [Video]

Speed tests. We just can’t seem to get enough of speed tests, and it turns out that neither can you. So it’s a good thing that every time a new iPhone or new version of iOS lands, we get speed test comparisons of this nature which gives us a good indication on what to expect from the phone in terms of performance.

The video embedded below, which comes courtesy of EverythingApplePro, gives us a good understanding of just how fast the iPhone SE is when it is compared with every iPhone model ever made. In case you were wondering, that’s a lot of testing for anyone to carry out mainly because Apple hasn’t been shy with its iPhone release schedule. All in all, 13 iPhones were tested including the newly released iPhone SE in order to demonstrate not just how fast the iPhone SE is when compared with the iPhone 5s and 5c it effectively replaced, but also how well it compares with the latest and greatest handsets to come out of Apple’s Cupertino headquarters. There’s even a brief segment on running temperatures for all phones. 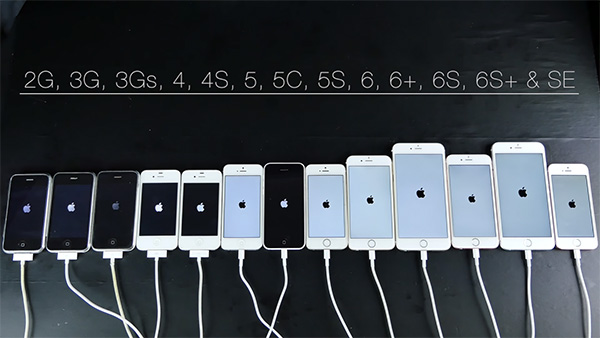 The results, as you might imagine, given recent comparisons and benchmark scores, show that the iPhone SE is quite the miniature powerhouse when compared to the devices that came before it thanks to the iPhone 6s internals, but it’s also amazing to see just what the newer handsets are capable of when they are sat beside an original iPhone from 2007. Yes, it’s no surprise that these things are faster than kit that’s almost ten years old, but it’s not every day you see them running side-by-side!

But, you know, it’s all in the screen size.