Samsung Galaxy Round Smartphone With A 5.7-Inch Curved Display To Be Announced This Week

Over the past couple of years, many suggestions have been made that smartphones and tablets, as well as other digital devices, will begin to take advantage of flexible display technology. Yet while the concepts and such have been aplenty, we’ve yet to see a smartphone rocking a flexible display, but for those sufficiently intrigued, you won’t have to wait much longer to see one. Samsung, as it does so often, is first to the draw, and its 5.7-inch Galaxy Round is said to feature a flexible panel around the edges, something which was confirmed by a Samsung executive at the end of last month.

Of course, a smartphone with a curved display is going to raise more than a few eyebrows, and naturally, there will be a sizeable faction of skeptics in and around the mobile industry. Yet, it was Samsung that first took the rather brave step of pushing out the enormously large smartphone, otherwise now known as the phablet, and although the Galaxy Note had its fair share of naysayers back when it first launched, it’s now considered one of the company’s marquee product lines.

The Galaxy Round is apparently going to be announced later on this week, and will indeed be the very  first smartphone to pack a flexible display. According to the folks of ETNews, the Galaxy Round’s hardware features and specs will be almost identical to those of the Galaxy Note 3, and could see a launch – at least, in South Korea by – a matter of days following the announcement.

The device will apparently be carried by SK Telecom, and although none of this information is official or even confirmed, we could well be on the cusp of one of the more interesting smartphone releases this calendar year. Apparently, the device will be curved along the sides for more comfort when making a phone call, and these curves are also said to make game playing and movie watching a much more fulfilling experience. 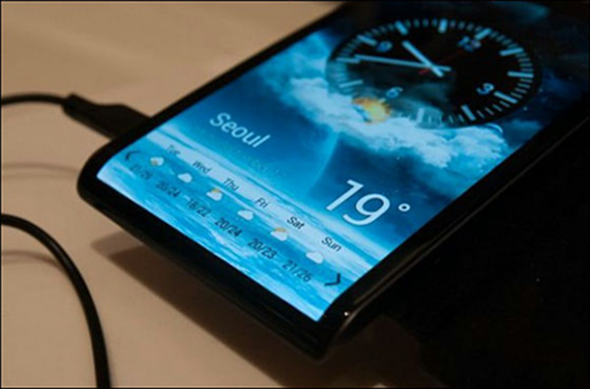 Of course, we’ll have to wait to see whether this is the case; that is, if the device is even legit. Considering how much Samsung charges for the similarly equipped Note 3, don’t expect the Galaxy Round to come cheap, even if the as-rumored lack of an S Pen rings true.