Galaxy Note 3 has only gone on sale today, and Samsung is already planning on increasing the competition in the smartphone market by introducing an entirely new device next month.

The executive team in charge of Samsung’s mobile business is obviously keen to make sure that they remain entirely relevant in the minds of the consumer as we approach the vital holiday shopping season. The South Korean company has announced that it will be introducing a new smartphone that will feature a curved display, and looks to inject innovation into a market that analysts seem to think is stalling. Don’t let those excitement levels get too high though, as this won’t be the entirely flexible and malleable display technology that we’ve been hearing rumors about.

It seems with every major device release from the large manufacturers, we see a public outcry for more innovation. Consumers want companies like Apple, Samsung and HTC to push the boundaries of what is possible, and it seems like investing in flexible display technology is what Samsung intends to do as it moves forward. D.J. Lee, who operates in the role of Head of Strategic Marketing for Samsung’s mobile arm confirmed the imminent announcement by declaring: "we plan to introduce a smartphone with a curved display in South Korea in October".

One of the main talking points of a device of this nature will be the fact that the beautifully crafted display will extend to the sides of the device. Apple’s iOS 7 operating system makes a push to get users to interact with every pixel of the Retina display by encouraging developers to maximize edge-to-edge screen real-estate in their apps. However, Samsung’s curved device will go a step further by actually wrapping part of the display around the external shell of the phone. 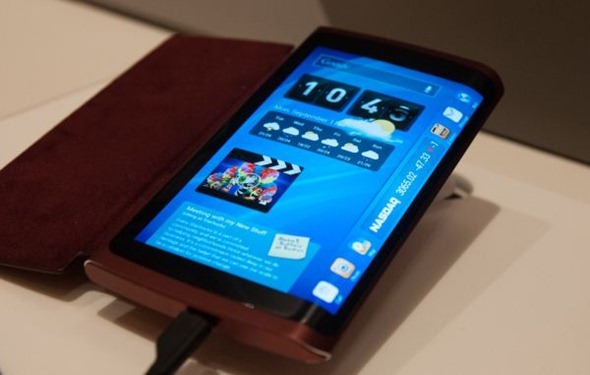 Although, we have already seen partly flexible displays and screens used in other consumer products, this will be the first time that a mobile company will go to market with a product of this nature. Samsung’s challenge will come from whether or not they can get themselves into a position where they can mass manufacturer the necessary components at a competitive price. We will keep our eyes firmly peeled for developments on this one.