Back at WWDC 2012, Apple announced that iOS 6 would be getting a new native app called Passbook, which, as we now know, is a utility offering an organized, digital solution for vouchers, tickets, boarding passes, and other wallet-fodder. Not to be outdone, arch-rival Samsung has just taken the wraps off a very similar utility by the name of Wallet, which looks to be an Android incarnation of Apple’s fledgling offering. Having made the announcement at the big Mobile World Congress, the Korean company has also given a short video demonstration, and although the clip is only 45 seconds long, it looks as though the app offers the same functionality as the Cupertino company’s earlier version.

Samsung got itself into a few spots of bother last year over allegations (some unfounded, others adjudged to be correct) that it had copied numerous Apple products. This not only applied to hardware designs, but also within the software, and although things have been quiet on the Apple versus Samsung (at least, from a legal perspective), the announcement of Samsung Wallet is sure to agitate (or appease, depending on which way you look at it) the lawyer folk of the Californian iPhone maker. 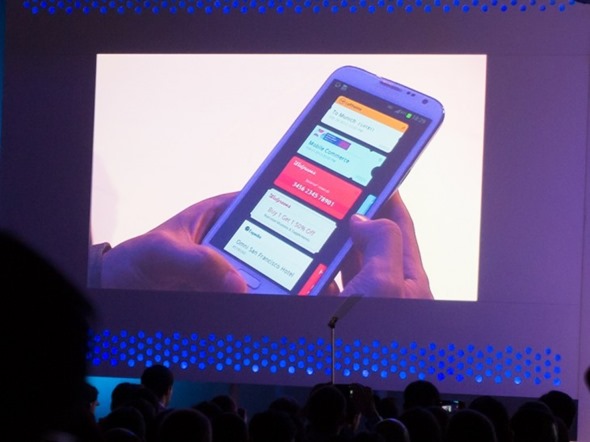 Irrespective of the continued spat, however, the fact remains that Samsung has released a new product. The usual array of partners have happily jumped on board, including Walgreens, MLB, Expedia, Booking.com, Hotels.com and Lufthansa .

Today, as many of you will know, is Samsung’s Developer Day, and as well as launching the product and explaining one or two of its features, the Galaxy maker also touched upon the open API, which will allow users to readily save tickets, boarding passes, coupons and such, and locate them from a centralized hub.

Samsung filed a trademark application of the name ‘Samsung Wallet’ with the USPTO almost a year ago, and although the app will not support NFC payments, the just-announced deal with Visa should take care of that.

Since the Galaxy S IV is highlighted as the first device to see Visa’s NFC software, it’s safe to assume it will also debut Samsung Wallet. Indeed, it drops on March 7th, a week prior to the announcement of the next flagship, and if you’ve been waiting for a Passbook-type app to hit Android, this is it.