I remember watching an episode of The Outer Limits about seven years ago, and although a purely fictional televisions series, this particular episode focused around the creation of humanoid life forms using what they called nanobot technology aimed to create intricate Androids in the form of humans. The whole premise of the show was that these robots could then be used to carry out the more menial tasks associated with everyday life. 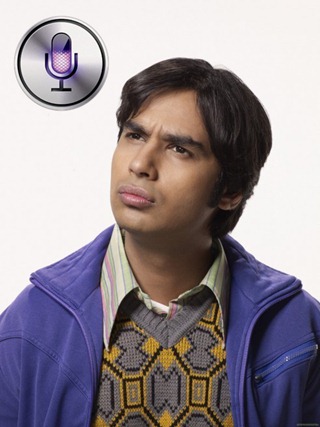 Perhaps, unsurprisingly the main scientist in the episode decided to give the robot an appealing feminine look, but that’s what being a lonely scientist can do to you. Step forward seven years, and Raj from the Big Bang Theory is discovering the benefits that artificial intelligence can have on your love life. For those who don’t follow the show, Raj is an astrophysicist who struggles to make any form of audible contact with women outside of his family, so needless to say his dating life is non-existent.

Raj also suffers from selective mutism, which is actually a recognized medical condition; meaning that the afflicted struggles with shyness and the ability to talk to the opposite gender. I never imagined a situation where I would be saying that Apple Inc. may have provided a piece of software which helps those who are chronically shy, but The Big Bang Theory is set to feature an episode where Raj receives a brand new iPhone 4S which contains the Siri software. Siri is obviously designed as a natural language application which acts as a personal assistant and evolves through to provide a better experience.

As if the notion of having an emotional connection to your iPhone software wasn’t bizarre enough, the situation is intensified when Bernadette and Howard arrive at Raj’s home to find him dressing his new software-based girlfriend for a romantic meal. The flirtatious Siri also haunts the poor man’s dreams, with the intelligent assistant being portrayed as a beautiful temptress in a slinky black dress who exists solely to deliver interactions amongst the Siri-using world.

Would this be your idea of heaven or hell? I’m pretty sure I can’t be the only person who has imagined what a real life version of the female Siri would look like. The Big Bang Theory airs every Thursday at 8 p.m. EST on the CBS network.