In a similar fashion in the cat and mouse game between Apple and the jailbreakers, I am pretty sure that this back and forth saga between Apple and Samsung is likely to continue for quite some time. The two companies have an extremely turbulent relationship, with Apple on one hand being Samsung’s largest components customer, but the two companies are also dragging each other through different lawsuits claiming the other has infringed upon certain patents.

According to research firm Strategy Analytics, Apple finished the final quarter of 2011 in a strong manufacturing position, after shipping 37 million iPhones in comparison to Samsung’s 36.5 million. The half a million difference gives the Cupertino company a small set of bragging rights, making them the world’s largest smartphone distributor for the final three months of last year. Unfortunately for Apple, the statistics don’t tell the full story, and whilst they did finish the year in a strong position, it was ultimately Samsung who shipped the most units during the whole twelve months of 2011. 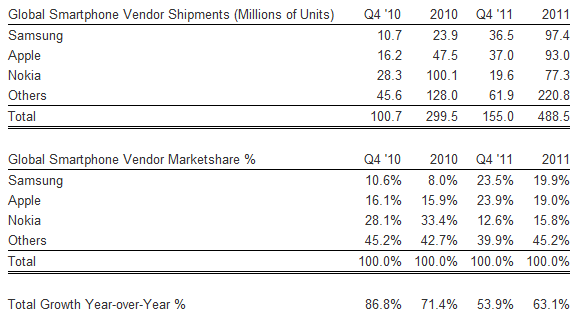 The numbers reveal that Samsung shipped 97.4 million smartphones compared to Apple’s 93 million during the year. 2011 was also the year when Samsung exceeded Apple’s smartphone sales for the first time, but it is likely that the top mobile vendor crown will go back and forth on a consistent basis. The numbers and news for Apple and Samsung are very encouraging, with the smartphone industry also having a bright future to look forward to as shipments of smartphone devices rose by a whopping 54% in the final quarter of last year.

With the total number of mobile OS-powered devices reaching 488.5 million during 2011, the leading device manufacturers have every reason to look forward to a rosy future. However, Finnish device maker Nokia can walk away from 2011 a little despondent after they slipped to the number 3 manufacturing spot with their total market share slipping from 33% down to just 15.8% during 2011. The company is starting to release a number of their devices which feature the Windows Phone operating system, but it is unlikely that they will be able to hold onto third place in the interim period until the new venture takes off globally.

The figures for the first quarter of 2012 are certain to be an interesting read.