Apple Is No. 1 Smartphone Manufacturer In US, Despite Having Just Two Handsets In Market

Continuing to take the mobile phone industry by storm, Apple has found itself sitting pretty at the top of a list of smartphone OEMs. This particular list shows Apple is currently the top dog when it comes to smartphone market share for the three months ending May 2011. 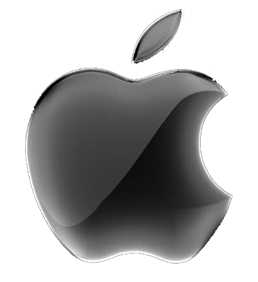 The ComScore data shows that 76.8 million people owned smartphones in the United States during the period, with Apple’s iPhones accounting for 26.8% – not bad for a company with just two handsets on sale currently. 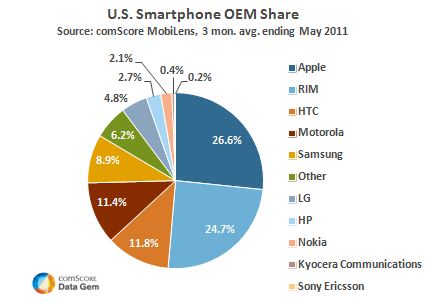 With Apple having just two dogs in the race – the 12 month old iPhone 4 and 2 year old iPhone 3GS – this is an achievement that should not be underestimated.

With the competition, HTC specifically, putting out umpteen different handsets, on a variety of carriers, sporting every mobile operating system under the sun, it’s perhaps expected that Apple would lag behind. This, however, clearly isn’t the case.

During the three months ending in May 2011, 76.8 million people in the U.S. owned smartphones. Among smartphone owners, Apple accounted for 26.6% of devices making Apple the top smartphone OEM (Original Equipment Manufacturer) for the month. RIM followed accounting for 24.7% of the market, with HTC capturing 11.8% share. Motorola and Samsung rounded out the top five with 11.4% share and 8.9% share, respectively.

Rumors have been around for some time now that Apple is planning on bringing more iPhone handsets to market, with Google’s Android being the main reason for any potential move to widen the iPhone product line. Google currently allows anyone and everyone to use the Android OS – a plan that has seen an explosion in usage, with smartphones, tablets and just about anything with a plug receiving the Android treatment.

A possible iPhone 5/4S release later this year can only help Apple continue it’s considerable OEM market share, whether multiple iPhones are on the horizon, or not.

With results like this though, Apple could be forgiven for thinking that their current philosophy of one size fits all is still the way to go.