While MuscleNerd of the iPhone Dev-Team has already confirmed that the existing version of Redsn0w 0.9.8 (Windows/Mac) for iOS 5 can jailbreak the Beta 3, another iPhone hacker ih8sn0w has just pushed an update to Sn0wbreeze for Windows which can not only jailbreak iOS 5 Beta 3, but can also preserve the baseband for iPhone 4 and 3GS users who rely on Ultrasn0w or Gevey SIM unlock.

Remember, this is a tethered jailbreak for all devices except for old bootrom iPhone 3GS. iPad 2 isn’t supported. Also, this is intended to be used by developers only. Please proceed with caution. 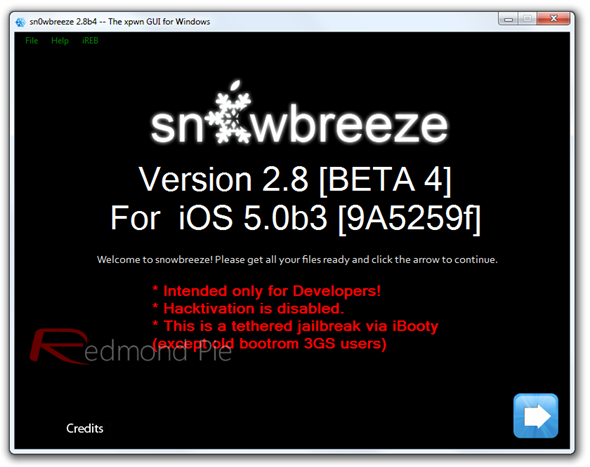 Instructions for jailbreaking iOS 5 beta 3 are exactly to the last release. You can simply follow our detailed step by step instructions posted here to jailbreak iPhone 4, 3GS, iPad 1, iPod touch 4G/3G and Apple TV on iOS 5 beta 3 using this version of Sn0wbreeze.