UPDATE 1: As it turns out, the current version of Redsn0w was having sandbox errors when running apps from the App Store. The just released Redsn0w 0.9.8b2 for both Windows and Mac fixes this issue. Download links are provided at the end. 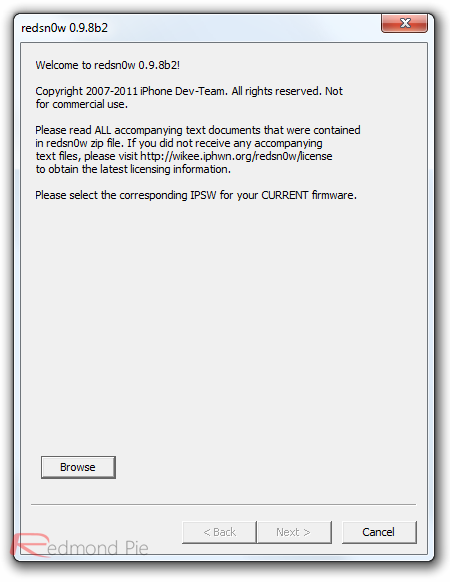 We’ve update redsn0w to account for the sandbox changes that affected App Store apps in 5.0b3 (and it now recognizes the IPSWs for all three betas so far).  If you already jailbroke 5.0b3 using the previous redsn0w, you don’t need to re-jailbreak…just use this updated version to boot tethered.

According to MuscleNerd, a prominent member of the iPhone Dev Team, iOS 5 Beta 3, which was released to Apple developers a few hours ago, can be jailbroken using the same version of Redsn0w that was used for iOS 5 Beta 1 and Beta 2.

MuscleNerd made the official announcement on Twitter shortly ago:

Last month, shortly when the first beta of iOS 5 was issued to registered developers, the iPhone Dev Team released Redsn0w 0.9.8 for both Mac and Windows which supported iOS 5 for the first time. Back when iOS 5 beta 2 was released, many were surprised to find out that the same version of Redsn0w was still able to jailbreak it. It now turns out that Beta 3 can also be jailbroken with Redsn0w 0.9.8.

iOS 5 was first announced at Apple’s yearly Worldwide Developers Conference, with a beta 1 release being seeded on the same day, followed by Beta 2 a few weeks later and Beta 3 today. iOS 5 includes many improvements that have been long-awaited by iOS users, including a new notifications system, known as Notifications Center, a new dashboard where all notifications sent by all apps are displayed; iMessage, a proprietary instant messaging client available exclusively in iOS; new system-wide Twitter integration; and a built-in setup wizard, designed to get new users up and running without the need for a computer connection. We’ve written a detailed write-up on iOS 5, you can read it here.

Redsn0w is a relatively easy method of jailbreaking a device, although it requires a moderate amount of knowledge on how to perform basic maintenance tasks in iOS, just as entering DFU mode. This is also a tethered jailbreak, meaning that users need to plug their device into a computer running Redsn0w every time iOS starts up in order to boot it into a jailbroken state. You can find out how to jailbreak your device using Redsn0w 0.9.8 here.

In order to install and activate iOS 5 legally, you need to be a registered developer at Apple. Anyone with an Internet connection who’s willing to spend $99 per year is allowed to register at Apple’s developer site. A developer subscription won’t only give you access to pre-release versions of iOS, but also to developer-related tools and documentation.

Just like iOS 5 at the moment, the developers of Redsn0w have stressed that this jailbreak is aimed for iOS developers only, given the lack of testing it should have undergone. Please proceed with caution.