Unlock iOS 5 On iPhone 4 With Gevey SIM: Yup, It Works, But Legality Is Still Questionable [PHOTO]

Gevey SIM is a hardware-based unlocking method for iPhone 4 which works with most basebands. Today, we received a tip from a reader who has tested Gevey SIM on iOS 5… and it works! 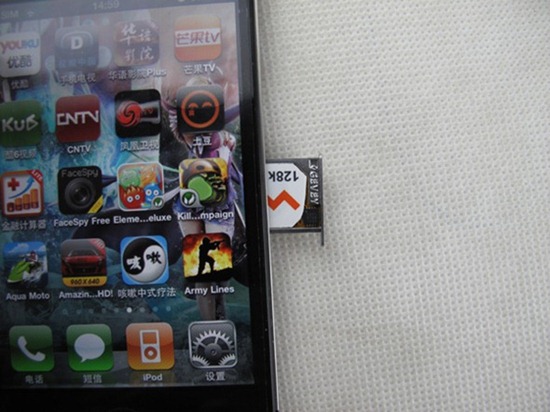 It involves using a thinner-than-normal SIM card which actually needs to be inserted along with the actual SIM card into the SIM slot. Then, you have to follow a few steps such as dialing an emergency number (112), turning Flight Mode off and on etc. to unlock your iPhone 4. It works without jailbreaking.

The method is a controversial one as its legitimacy is questionable based on the fact that it is not exactly right to misuse emergency calls.

We wrote about it before back in March and stated that it worked only up to iOS 4.3. Well, it appears that Gevey SIM’s magic still works on iOS 5.

Reader Usman sent in these screenshots of his iPhone 4 hardware unlocked using Gevey SIM running a beta version of iOS 5:

The photos clearly show the iPhone running on iOS 5 with baseband 04.11.04.

I’d like to remind our readers that iOS 5 has already been jailbroken already. iPhone Dev Team member MuscleNerd tweeted a screenshot on 7th June showing iSSH (a jailbreak-only app) running on an iPod touch 4G with iOS 5. Today, Redsn0w 0.9.8 was released as a tethered jailbreak for iOS 5 Beta. Instructions on how-to jailbreak iOS 5 can be found here.

Even though the jailbreak, as of now, is tethered. But as time goes by, there probably will be an untethered jailbreak available. The Dev-Team has shown time and time again just how capable they are and we can trust them to deliver again when iOS 5 comes around.

iOS 5 is releasing this fall and there is a lot to look forward to. We’ve been covering its official features as well as the hidden ones recently. Stay tuned to us as we inform you of the hidden goodies in iOS 5 that are slowly coming to light.