If you’re thinking of applying a tethered jailbreak on your iOS 5 device, your dreams might be shattered, if what Stefan Esser, the guy who previously developed jailbreak exploits for iOS 4.3.x, has been told is to be believed.

R.I.P. – I just heard Apple killed the ndrv_setspec() integeroverflow and his friends in iOS 5.0b1 – if this is true the untether is dead

Just yesterday, we reported that iOS 5 had been successfully jailbroken by the iPhone Dev Team, less than 24 hours before the new iOS was unveiled. That method, however, is tethered, meaning that the iPhone needs to be plugged into a computer running in on every reboot to successfully boot it into a jailbroken state. If you’re on the road and away from a computer, that might be fairly painful.

Of course it’s possible that developers find other way around it, but Apple has definitely been tightening up it’s operating system, and making jailbreaking more difficult. A few years ago, there was no such thing as tethered jailbreaking (since modifying the file system was unbelievably easy), but if this holds true, tethered will not be the only way to go about it.

iOS 5 was introduced on Monday at Apple’s introductory WWDC 2011 keynote. The new version of the operating system, which will run on all modern iOS devices, is a blockbuster upgrade shock full of new features, such as Reminders, a location-based alerts system; an enhanced Safari browsing with true tabbed browsing and "Reader" mode, just like the Desktop versions of the browser; system-wide Twitter integration; and a new Notifications Center, replacing Apple’s aging pop-up notifications found in iOS 4.

Stefan Esser, known as @i0n1c on Twittter, has authored untethered jailbreaking solutions in the past, more recently the iOS 4.3.x jailbreak. Sadly, he’ll have to find another way around it this time. Earlier this week, we posted a rather long write-up questioning the need for most enthusiasts to jailbreak at this point, since Apple has expanded its offering so much, especially with this release of iOS 5. Is it really worth having to plug a phone into a computer, essentially crippling it, just to access a few extra themes and tweaks?

That said, now that a tethered jailbreak has apparently been completed successfully, many of us will certainly rush to apply it once it’s available. Who can blame us, we’re geeks! 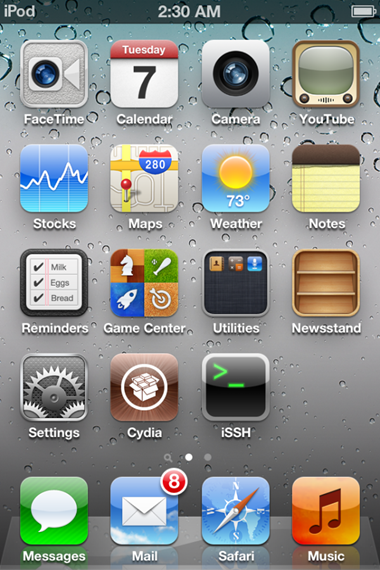