iOS 5 To Allow FaceTime Over 3G, Another Reason Not To Jailbreak Your iPhone?

If you use FaceTime often, you’re probably familiar with how frustrating it is to have to get on a Wi-Fi network in order to use the service. According to reports, that’s not the case with iOS 5 beta, which also allows FaceTime over 3G.

FaceTime is Apple’s proprietary video conferencing service, unveiled last year with the introduction of the iPhone 4 and present in every iOS device ever since. As with any service with heavy video streaming, one might guess why Apple hasn’t originally allowed it without a Wi-Fi connection: the carriers. With reception as bad as it is in crowded US cities, the last thing carriers would ever want would be having to support a full video chatting service.

It’s still unclear whether FaceTime was enabled by accident, for testing purposes or whether the change is actually here to stay. One is left to wonder how and if carriers have already given Apple the green light, or has just been left hanging in exchange for the huge amount of market share the iPhone provides them, especially in countries where they have exclusivity rights. 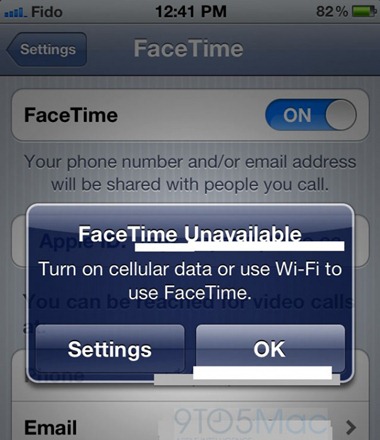 As a word of caution, it’s important to remember that while the impact this will have on carriers is debatable, the impact this will have on your phone bill isn’t: something as intensive as a video chat service might blow your data cap pretty quickly. It’s also important to note that iOS 5 is still in beta form, meaning that Apple might reverse this move at any time (or be forced to by AT&T and its friends).

Meanwhile, users with jailbroken devices (iOS 4.x) have long been able to tweak FaceTime to get around this restriction, using mods such as My3G. If you’re interested in setting it up, check this out.

After months of speculation, iOS 5 was unveiled at WWDC on Monday, on the same day that the first beta build was issued to registered Apple developers. The new version of Apple’s mobile operating system includes numerous enhancements, such as a new notifications system, a new to-do application, an enhanced Safari browser and camera apps, among others. Since then, enthusiasts have toyed around with the first beta, and uncovered details on how well the system will work on the iPhone 3GS, and even managed to jailbreak it completely.

The final version of iOS 5 is expected to come out this fall.