Ever since iOS 5 Beta 3 was seeded to developers earlier today, enthusiasts have taken a time to thoroughly examine the system and look for changes. It turns out that iOS 5 Beta 3 now allows users to set custom alert tones for everything, from new text messages and emails to calendar alerts, reports TechCrunch.

This feature has been quietly added, without any comment from Apple on the matter, even though it adds a customization option to the system that any 10-year-old basic phone is able to do. In order to start adding your custom tones, you need to access the iOS Settings App, head to "Sounds" and tap on the tone you’d like to change. Aside from all the default tones, you should now see a new option named "Buy More Tones", which suggests that Apple is looking for yet another way to monetize the platform. 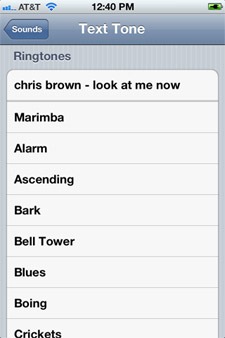 Back at a iTunes-related event in 2007, Apple enabled the option for iPhone users to create ringtones based on a clip from a song of their choice, all from iTunes. This feature didn’t generate much more press than the post-event coverage, mainly due to the cost of the ringtones: 99 cents, in addition to the cost of the song, was just too much, especially since there already were custom tools that allowed ringtones to be created for free. This feature was considered a flop and was quickly forgotten by Apple, although it now seems to be rising from the ashes. It’s still unclear how the new "buy custom tones" feature will work, but if the process is made seamless enough, it’s possible that enough users might adopt it.

Other features in iOS 5 Beta 3 have surfaced as well, such as additional options in the system’s new setup wizard, which allows users to get a new device up and running without a connection to iTunes; as well as a new icon for Reminders, a new to-do system that’s able to display notifications at a certain time, in a certain location. iOS 5, which was announced at Apple’s annual Worldwide Developers Conference includes several advancements, such as improvements to Mobile Safari and a brand-new notifications dashboard known as Notification Center. You can read more about iOS 5 here.

Similarly to previous iOS 5 beta releases, Beta 3 is available to all Apple registered developers. The final version is expected to come out sometime this fall.