There is no getting away from the fact that mobile phones are quickly becoming much more advanced, with mobile operating systems such as Android, iOS and Windows Phone becoming the most talked about software throughout the tech world. The introduction of the Apple iPad in 2010 has also started a trend amongst manufacturers, with a new release of an Android powered tablet seeming to come every other week.

With every release of various mobile operating systems, the developers and creators make a big deal about the addition of new features and new capabilities which make their particular software ‘the most advanced mobile OS in the world’ and whilst it is difficult to argue against the fact that smartphones and tablets are extremely powerful and functional, for me; there has always been some fundamental features missing. The topic of security is always high on the agenda when comparisons are being made between operating systems, but just what happens when you want to lend your smartphone or tablet to a friend, colleague or family member?

Desktop computers and laptops have the benefit of being able to set up multiple user accounts, allowing households with multiple family members to have their own private area of the machine. The ability to have your own user account provides not only peace of mind, but in the event that a laptop or machine should be stolen or fall into the wrong hands; you know there is an extra level of protection between that person and your data. with the fast paced evolution of mobile devices, I would have assumed that user, or guest accounts would have become commonplace by now – especially on tablets. 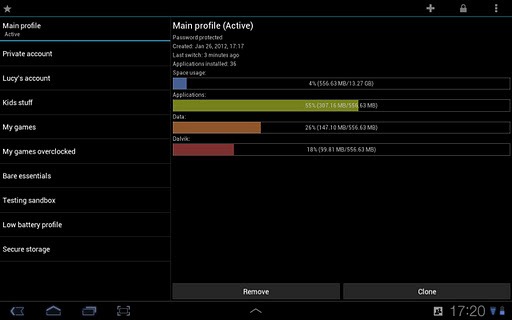 Without wanting to flog a dead horse, I make no secret of the fact that I am a huge advocate of the communities which exist to provide jailbreaking and rooting privileges around iOS and Android OSes. The stock operating systems are undeniably brilliant, but the innovation and work ethic which exists amongst these ‘underground’ developers is extremely refreshing and undoubtedly brings new and exciting features to our devices. Once such development is an application called ‘SwitchMe’ which brings guest user accounts to Android devices which have root privileges. 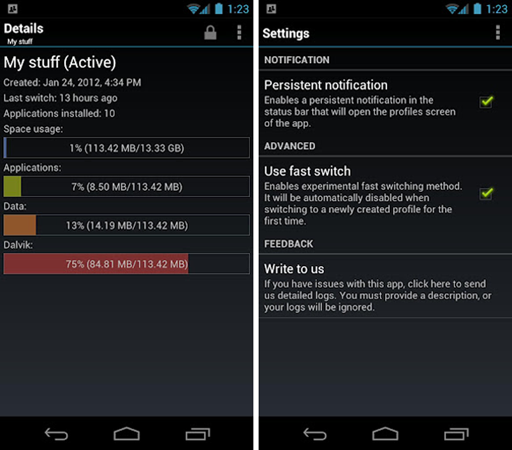 SwitchMe is free to download and lets users define additional profiles giving the ability to manually reboot into any of these new profiles. One of the only things missing while in a newly created profile is storage space: the apps are isolated onto different sections of flash storage. This lack of functionality could make things a little bit difficult, especially if your device has less storage space and you are the kind of user who stores a lot of media and apps or games.

As mentioned above, root privileges are necessary for the operation of SwitchMe due to the required set up of different storage areas. This application may not be for the feint hearted amongst us, as even the developer recommends performing a full Nandroid backup before using the software. SwitchMe is available as a free download from the Android Market with a premium key being charged at $1.98 and root privileges being a pre-requisite of use.