There’s no doubt that Samsung’s Galaxy S line of Android smartphones is a monumental success. Both the Galaxy S and Galaxy S II have proved exceptionally popular amongst those wanting an Android phone with a huge screen and powerful specs.

The Galaxy S line was such a hit that Google even gave its latest "Nexus" phone to Samsung. Not just that, the Google even gave up the naming convention it’s been using to date, allowing Samsung’s "Galaxy" branding to come before the Nexus name. The Samsung Galaxy Nexus was born.

But what about Samsung’s bread and butter? What about its own Galaxy S line?

With Mobile World Congress not too far away now it had been expected that we would be seeing some movement from the Koreans, with the show offering a great place to announce a new handset.

That suggestion has been blown out of the water at late, and Samsung’s own executives seem to think that the whole Samsung Galaxy S III thing is under review. That almost confirms there will be no announcement just yet.

It’s entirely possible that Samsung is concerned about a new Galaxy S handset cannibalizing the current Galaxy S sales and is currently mulling over when to bring the highly anticipated handset to market.

All that said, a photo has popped up of what appears to be the Samsung UAE website, with the new handset showing in a drop-down list. The Samsung GT-I9300 as it is expected to be known, is clearly visible in a list that includes all of Samsung’s smartphones. Does that mean someone somewhere at Samsung is being a little coy about release dates, or has someone had a case of the itchy trigger finger and sent a page live that wasn’t ready? 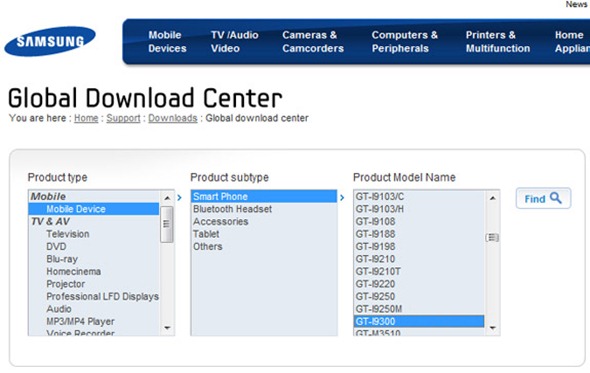 Samsung may simply be waiting until it is happy with whatever overly it is going to add to Ice Cream Sandwich, though we can only hope they throw caution to the wind and give us their second vanilla handset in a matter of months!

We’ll find out soon enough, but it’s fair to say that Samsung’s Galaxy S III handset will be a huge seller, no matter when the thing gets released. Would the company really want to put it up against its own flagship smartphone?