Through a rather dubiously-sourced snap of a supposed internal presentation on Samsung’s ‘smartphone evolution’, the world gets its first glimpse of the Samsung Galaxy S III, due early next year.

The roadmap, which clearly states that "COPYING OR REPRODUCTION IS NOT ALLOWED" (anyone seeing the irony?), shows the original Galaxy S, which then evolved to the Galaxy S II, and finishes up with the S III, and with a little input from an anonymous tipster over at Phandroid, gives us quite a few details to mosey through. 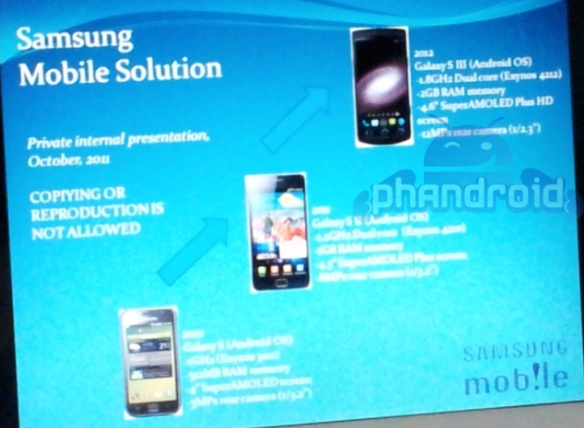 When you look at those purported specs, it puts those of the recently announced, soon-to-be-released iPhone 4S from Apple firmly into the shade. If this snapshot is to be taken on board, then expect a 4.6-inch Super AMOLED Plus HD display – rendering it the largest smartphone screen so far to date. Having said that, as discussed by designer Dustin Curtis, increasingly larger screens may not necessarily be the way forward for smartphones, with the average thumb only able to cover a 3.5-inch radius.

Aside from the big, bright screen, there is also alleged to be a dual-core, 1.8GHz Exynos 4212 processor, 2GB of RAM and a whopping 12 mega-pixel camera. Such stats make for extremely impressive reading on paper, but lest we forget that such a powerful concoction of hardware can only mean significantly higher battery usage, so let’s hope that the Galaxy S III has the energy to cope with all that power – should any of these implementations reach fruition.

Not only will the device be thinner and lighter than the SII, but the design will, according to the tipster, be modified and tweaked to avoid any further courtroom beef with Apple – a company with which it shares chequered relations. The report also notes of NFC and LTE capabilities, and a W750 BSI CMOS camera sensor. Again, early adopters of LTE devices have often been hindered by excessive battery consumption, thus Samsung really has its work cut out to bring a device of such specification to market. Not saying it’s impossible, but it will surely be a huge challenge.

Obviously, with no way of confirming or proving the authenticity of the leak, it could turn out to be fake, but we felt it certainly worth featuring with such an impressive inventory of hardware features, so look out for more on Samsung’s next smartphone as and when it comes, here at Redmond Pie!