If you’re a PUBG Mobile gamer and are playing in a location other than China then you may have received a new invitation, giving you a first look at version 0.5.0.

The beta invitations have started to roll out to selected gamers, with version 0.5.0 being made available in English and to the global audience for the first time.

The current shipping version of PUBG Mobile is version 0.4.0 internationally, and while version 0.6.1 is already in use in China, it’s not unusual for this disparity between versions. In fact, Chinese gamers who are part of the beta channel are already testing out version 0.7.0 which is likely some way off being made available to the rest of the world.

If this update is exactly the same as the Chinese version 0.5.1 then we can expect performance improvements that will see the game run at 60 frames-per-second as well as enhanced audio. New gaming modes as well as improved gaming mechanics can also be expected, although we’ll have to await some proper release notes to be sure.

If you’re one of the few to be accepted into the beta program then you will have an in-game message telling you so, but if you have not and are using an Android device then there may be another way to get in on the action. 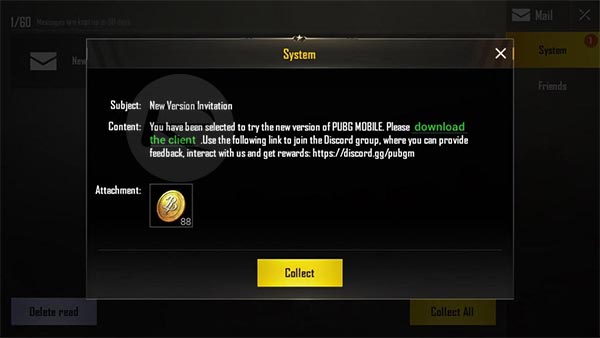 One PUBG Mobile gamer has posted instructions on how to get your hands on the beta version, although it will involve deleting the live version of the game and installing a version (APK) that is downloaded manually from the Internet and sideloaded onto your Android device. We’re not sure about any potential security implications that may come with that, but if you’re desperate to give the beta a try then this is something you can try at your own risk.

You can check out PUBG Mobile 0.5.0 beta of English Global version in action in the video embedded below: