An alleged spy shot of the next-generation iPhone has come up today!

The blurry spy shot, which was discovered from a thread on MacRumors Forums, shows a very slim iPhone-like device which the uploader claims to be the hotly anticipated iPhone 5. The photograph was reportedly taken yesterday in the office of French wireless carrier and it has been embedded below for your viewing pleasure: 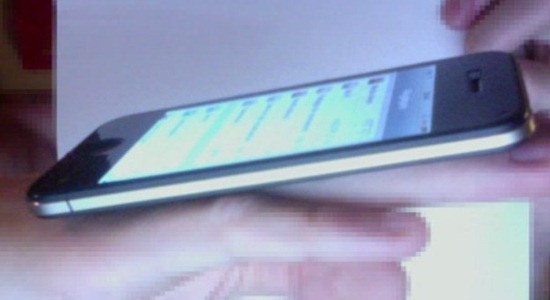 As you can see, it has the overall look of the iPhone 4 but is slimmer and, if you look closely enough, there is a hint of curviness at the edges which falls well in line with the rumors of the next-generation iPhone having a thinner profile with a tapered design. This, of course, could just be a hoax but just looks so very nice!

Rumors surrounding the next-generation iPhone 5 are heating up these days. The initial reports from Wall Street analysts weren’t very believable, but in recent times, a lot of well-sourced reports have come up which strongly suggest that the iPhone 5 will receive a launch date somewhere in September.

The September release date is supported by many different reports; reports such as the senior executive at Swisscom pointing to a September/October release date, AT&T notifying its employees for a new product launch, iPhone 3GS’ tightened supply and Apple increasing staffing across retail Apple Stores in US and UK just to name a few.

However, on August 1st, a report from All Things D’s John Paczkowski contradicted all reports by claiming that the iPhone 5 would launch in October instead.

As for the next generation iPhone’s design, we’ve heard about the reportedly leaked case design schematics which were later supported by actual cases from China. All these reports suggested a thinner, curved design which we see supported by today’s spy shot.

There are also reports of Apple releasing not one, but two new iPhones this year: a lower-end iPhone 4S and a higher-end iPhone 5. This rumor, from what we can tell, stems from the statement of Apple COO Tim Cook who stated that Apple does not want the iPhone to be a thing for the rich and wealthy and that they intend to target the lower-end of the market.

To sum it all up, the next iPhone will launch sometime in September or October with an official announcement coming a month prior to release date, or even sooner if we’re lucky enough. It will come with a dual-core A5 processor, 1GB RAM and a higher-megapixel camera – at least according to the unbelievably strong rumors.