People Are Already Selling iPhones With Fortnite Installed For Huge Sums, Up To $10,000!

Yesterday was quite the day in the world of Fortnite and Epic Games. By the time the sun came down Fortnite was no longer available in either Apple’s App Store or Google’s Play Store.

While anyone running an Android device can still sideload the game, those on iPhones are out of luck. And people know, which is why there’s a growing number of iPhones and iPads popping up on eBay.

They aren’t just any iPhone or iPad, though. These have Fortnite installed and that, right there, is the lure.

Anyone who has previously downloaded Fortnite should still be able to do so, which might be enough to get some people back up and running. But even then, it isn’t that simple. We know that the game will continue to function, but once the new season comes about? Not so much.

If you already downloaded Fortnite via the App Store, you should have no issues continuing to play Chapter 2 – Season 3’s 13.40 update –– whether you’re only playing on mobile devices or also playing the latest version of Fortnite on other devices.

Once Chapter 2 – Season 4 begins, players accessing Fortnite will still be able to play the 13.40 version of Fortnite, but will not be able to access any new content or the new Battle Pass.

With that in mind you’d have to be mad to pay some of the prices people are charging for an iPhone or iPad with Fortnite installed. Someone wanted $10,000 for an iPhone X the last time we checked! 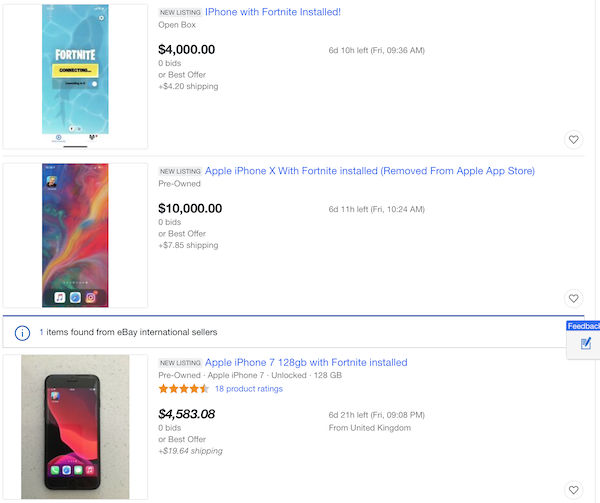 Don’t pay that. If you’re really desperate, just wait. We’d expect Fortnite to be back on the store within a week or two.