The Moto X has gotten the smartphone industry just a little bit excited, no less because it’s the first real collaborative effort between Google and Motorola since the search giant stumped up a whopping $12 billion to acquire its new subsidiary. The range of features, the (almost) pure Android experience, and the seemingly unlimited customization of the device’s aesthetics have made it a real talking point, but since it has only been released in the United States, not many have yet been able to get their hands on it. To see how it copes with wear and tear, the guys at Phone Buff have given the device the hammer and knife treatment, and although not perhaps the kind of instruments any smartphone will encounter frequently, responsible shoppers will definitely want to check to see how the Moto X copes when put to the sword.

The video starts innocuously enough, with a key run across the display in an attempt to force some scratches. While you probably won’t be taking any mallets or knives to your beloved handset, the key is a more realistic test, since many of us place a smartphone in our pockets next to keys. In times passed, this would prove the undoing of any display’s out-of-the-box smoothness, but as seen in the video, the front of the Moto X comes through virtually unscathed. 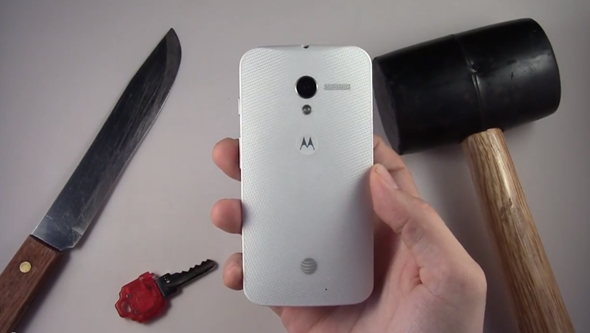 The rear of the device did pick up some scuffs when keyed, but this is to be expected, and with most fascias and covers offering protection to the back of any mobile device, an investment in a protective shell should help you keep your own Moto X in mint condition.

The display managed to withstand the commentator’s slasher movie impressions, but the chamfered edges suffered heavily, as one might expect. The way many smartphones are designed nowadays means that it can be a challenge to keep the outer ring free of any scrapes, and if you’re not going to be purchasing a case for the Moto X, you’re certainly going to risk clocking up some damage. 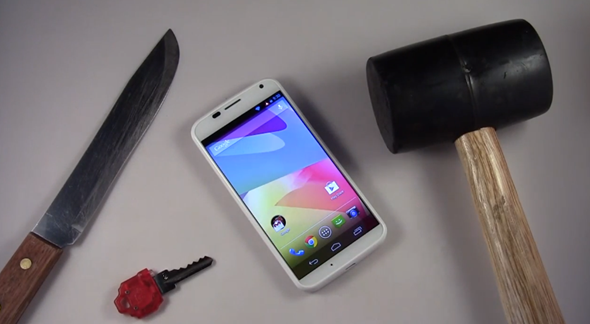 Finally, the Moto X came through the hammer test rather well, and even with some degree of force applied, was still in perfect working order. Sure, it did leave some slight discoloration on the display, as well as a few marks on the rear panel, but all in all, it’s fair to say that the Moto X is a fairly tough cookie.

Check out the video below, and be sure to leave your thoughts in the comments.

Thanks, David of PhoneBuff for sending this in!