According to the sources at TechCrunch, the next version of iPhone OS, which is set to release this June will have Bing as its default search engine in Mobile Safari. Microsoft and Apple have reportedly been in talks over a possible search deal since January of this year, but since then there has been no real news on this. 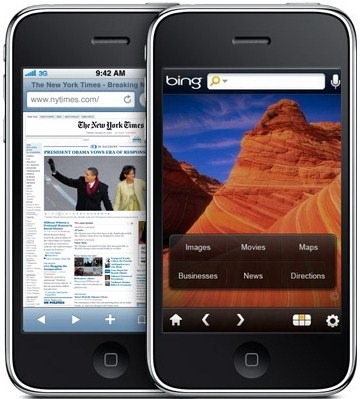 After all the recent conflicts over Android, the removal of Google Search from iPhone shouldn’t come as a surprise. Google has been rumored to be paying around $100 million dollars a year to Apple for the search rights, and ads that serves on the iPhone.

Also yesterday, there was this rumor about Microsoft’s CEO Steve Ballmer making an appearance at WWDC to announce Visual Studio 2010 for iPhone and iPad. This rumor was then quickly debunked by the official Twitter account of Microsoft. If not Steve B., then maybe there will be someone else from Microsoft who will be there to announce Bing for iPhone? Well who knows. For all this and more, we will have to wait for Jobs’ keynote at WWDC where he will announce the next iPhone along with iPhone OS 4. [via TechCrunch]