After years of cooperation, the CEO’s of Apple and Google, Jobs and Schmidt recently went daggers drawn as their rivalry got personal last week. This cold war between the two has been going on for sometime now, and has slowly converted into a full fledged battle when Eric was unceremoniously removed from the Apple’s Board of Directors. Also in the recent past, Jobs opined that the search firm’s motto of "Don’t Be Evil" was simply "bullsh*t" and that the new rival was fully intended on killing the iPhone with its Android despite the companies’ partnership on iPhone services. 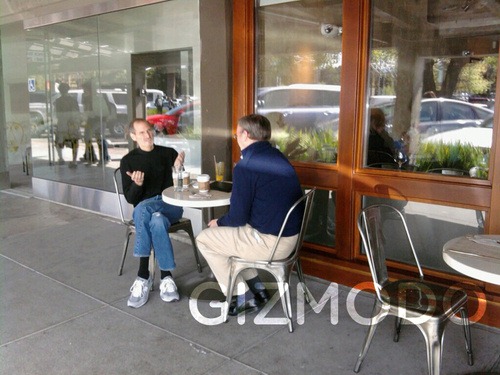 But what a surprise, for a change today, they were spotted talking (business?) at Calafia in the Town and Country shopping center in Palo Alto.

The tipster of Gizmodo, who saw them noted that the cafe where they were having coffee belonged to a former Google Chef Charlie Ayers. He also overheard a couple of lines from their conversation, which according to him appeared to be related to web content:

They’re going to see it all eventually so who cares how they get it.

And once they saw crowd gathering around the two billionaires, one of them said: 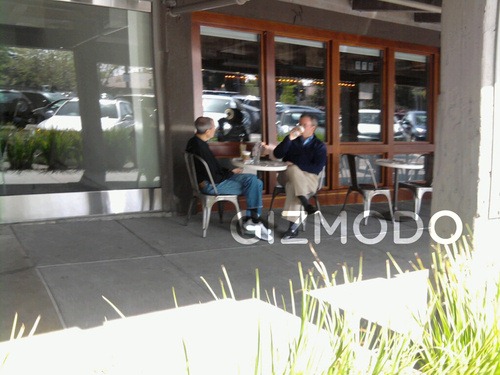 Schmidt appeared to be more quiet, mostly listening, and Jobs was the one who was doing most of the talking. Rather than discussing things at their HQs, they chose to be more informal and selected a coffee shop, that’s quite understandable because neither of them would have felt comfortable at each other’s HQs. So what do you think they were actually discussing? Google Voice dispute? the HTC-Android lawsuit? or the default search in Safari? [via Gizmodo]