Apple managed to instantly raise the excitement levels of the developers in attendance at this year’s Worldwide Developers Conference (WWDC) with the introduction of the wonderful ARKit framework.

What we didn’t plan for on the back of that was the slew of prototypes and app ideas utilizing ARKit that would ultimately end up exciting device owners. Now, as ARKit approaches the mainstream, we’re seeing a set of highly polished creations, including one called MeasureKit by developer Rinat Khanov.

A number of creative developers had the same train of thought when ARKit was first announced. In addition to the usual gaming implementations, we have already seen some developers showing just how performant and accurate ARKit will be when used for measuring purposes. Khanov has taken things a few steps further with MeasureKit by ensuring that his app best uses ARKit and the real world to be able to offer a variety of different ways to measure using nothing more than the device and a little bit of user interaction.

The power of this tool comes from the fact that it offers a very simple mechanism to measure different things in different situations. And all of this is offered to the user with a very small learning curve, making it essentially accessible to anyone who owns an iOS 11-powered iPhone and is in need of having something measured. From a feature perspective, users can expect to find a trajectory mode, the ability to measure distance from a specific point of reference, as well as being able to measure angles, height of individuals, and even build cubes that are placed into the real world. 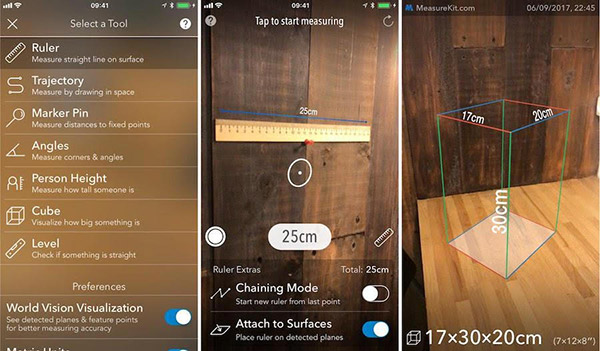 This is definitely by far one of the most fun and innovative ways to use ARKit, but which is also applicable to most users in the real world. When it goes live on the App Store, presumably in the coming weeks, it’s almost a given that it will have an instant user-base.

It’s likely that MeasureKit will be joined on the iOS App Store by an impressive range of ARKit-powered apps, including zombie games, portal-based experiences that look to transport people to other worlds, and even official offerings by multinational retailers and companies like IKEA.