Shocking new information from monitoring firm MUSO has filled us in on the extent of the issues being faced by HBO.

The company has published statistics that show that the seventh season of Game of Thrones has been pirated over a billion times, with the majority of that piracy coming through streaming sites.

It’s fair to say that executives at HBO have found themselves in somewhat of an emotional quandary over the last few weeks. On one hand, the wonderful seventh season of Game of Thrones has proven to be the most popular yet with TV ratings through the roof and far exceeding previous seasons. However, that success has been continually tainted by the fact that a group of hackers was able to extract information from HBO’s servers, as well as being faced with leaks from partners that allowed individual episodes to get into the public domain, and now, the devastating news that season seven has been rife with piracy.

Piracy of popular content, movies, and TV shows is always going to be a concerning issue for companies like HBO. Unfortunately, it’s just a fact of life that exists in this modern digital world, with companies involved in that space having to try their hardest to mitigate any leaks and prevent content from getting into the public domain in the first instance. It’s often difficult to accurately predict the levels of piracy, and especially difficult when it comes to streaming, but MUSO has put forward some numbers that suggest each episode was pirated 140 million times on average.

That information suggests that the majority of views came from streaming services, accounting for 84.7% of the total. The numbers show that approximately 9.1% of those views came from torrents shared to be downloaded directly to a machine. 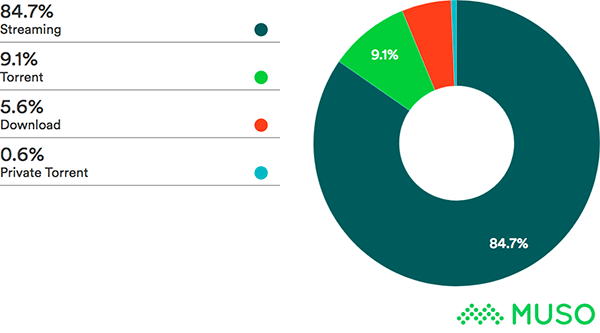 Andy Chatterley, CEO at MUSO, points out the obvious that data leaks from HBO certainly won’t have helped the situation:

It’s no secret that HBO has been plagued by security breaches throughout the latest season, which has seen some episodes leak before broadcast and added to unlicensed activity. In addition to the scale of piracy when it comes to popular shows, these numbers demonstrate that unlicensed streaming can be a far more significant type of piracy than torrent downloads.

Whenever piracy is mentioned, it’s very easy to instantly think “torrents,” but it would seem that unlicensed streaming on various sites is the main culprit in this instance.