The wait is over. LiberTV jailbreak for Apple TV 4 running tvOS 10.0 to tvOS 10.1 has been released. Here are the details.

It has been talked about and tasted for quite some time now, but the jailbreak for fourth-generation Apple TV units running Apple’s tvOS is finally here and available for download and use. Initial rumors of a potential Apple TV jailbreak were followed up by confirmation that Jonathan Levin was hard at working producing the necessary Apple TV app in in order to inject the semi-tethered payload. Now, as part of a collaboration with the ever faithful NitoTV, the LiberTV IPA file is available to download for use on compatible Apple TV models running compatible firmware.

First and foremost, it’s probably worth clearing up one of the more frequently asked questions focusing on the firmware versions which are actually supported by LiberTV. Since the jailbreak is based on yalu, it supports tvOS 10.0 to 10.1 on Apple TV 4 with the latest firmware version tvOS 10.1.1 not supported by the jailbreak. This is simply due to the fact that the exploited CVE-2017-2370 bug has been patched by Apple with that particular firmware version.

tvOS 9.1 is also technically supported, but full support for it will be added in a future update.

As we previously witnessed with the release of Luca Todesco’s early Mach_Portal+Yalu jailbreak, LiberTV is very much being pushed as being for the development community due to the fact that the jailbreak in its current form doesn’t actually install any working version of Cydia whatsoever which would usually act as a front-end interface for jailbreakers.

The use of LiberTV offers a full shell and the ability to sideload applications, and essentially do whatever you want if you have the technical capabilities to do so. And of course, an app like Cydia (if ever released by Saurik), or an updated NitoTV experience (which is coming soon), could also be installed on the device to give a consumer friendly experience. 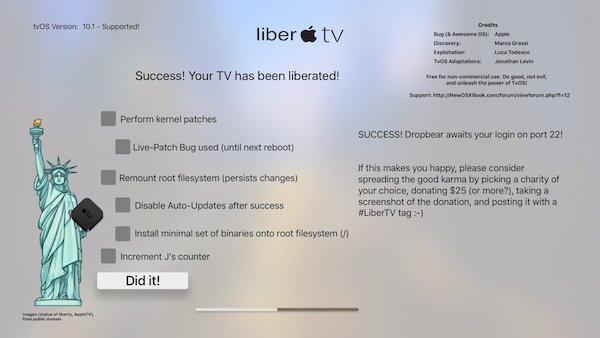 As with the initial version of yalu jailbreak, the official line here appears to be that we should be overwhelmed and excited about the fact that serious work is being undertaken on Apple TV in order to provide a liberated experience, but that users should also exercise caution at this early stage and only download and install if they possess the technical capability to do so. And speaking of downloads and installs, you can grab the LiberTV IPA from here [mirror link], and then sideload to your Apple TV using Cydia Impactor.