When we talk about modern-day jailbreaking, we instantly fall into the trap of assuming that it’s only an iPhone, iPad, or iPod touch which will reap the benefits, and that is typically because for a long while now, the Apple TV has existed without any jailbreak solution. Until now it seems.

According to Jonathan Levin, CTO of Technologeeks, the tvOS jailbreak – which would essentially liberate Apple’s fourth-generation Apple TV on tvOS 10.1 firmware – is “finally done” with additional details and the all-important download, “coming soon.”

At this stage we have no idea if “coming soon” means days, weeks, or months, but one would hazard an educated guess that if it is being tweeted about by Levin, then we could expect the download of a tvOS 10.1 jailbreak for Apple TV to be made available sooner rather than later.

The tweet from Levin is in its entirety below, including letting the world know that he actually botched an Apple TV in the process of creating this jailbreak, and there was also an accompanying image of an Apple TV running “top”, which is essentially a command line command to display processor activity.

Took buying another 10.1 TV to make up for one I foolishly botched, but the #TvOS #Jailbreak is finally done! Details, download coming soon. 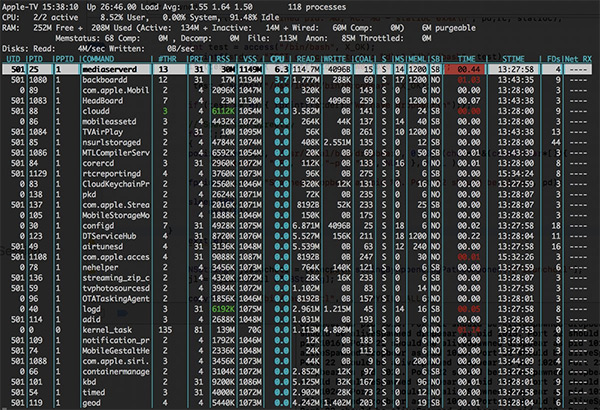 It’s currently unknown just how much interest there will be in a jailbreak for the latest Apple TV, or just what type of jailbroken experiences will be available for the platform in terms of tweaks and customizations, especially given the jailbreak is for tvOS 10.1 and not the latest publicly available firmware. With that said, there will be the usual collection of users who love to interact with the software and see how the jailbreak was actually put together and executed, with it looking likely that the CVE-2017-2370 kernel vulnerability was exploited in order to liberate Apple’s latest set-top-box running tvOS 10.1.

As soon as any additional information on this jailbreak solution is released, we will bring it right to you. Let’s just hope that it is offered as a stable solution with minimal chance of actually bricking or destroying an Apple TV for those that may attempt to get root access to the hardware, but who don’t exactly know what they are doing.

For now, if you are running tvOS 10.1, and are keen on jailbreaking it when, or if it arrives, we would advise holding off on updating your Apple TV for some time.