Tim Cook has used an appearance at a dedicated event in Silicon Valley to introduce a new documentary by former Vice President and Apple’s board member Al Gore, and recorded by venture capitalist Steve Jurvetson, called An Inconvenient Sequel: Truth To Power, which is of course a follow up documentary to Gore’s previous popular creation, ‘An Inconvenient Truth’.

Given the nature of the documentary, the location of the introduction, and Cook’s and Apple’s commitment to environmental policy, the Apple CEO seemed to have been the perfect choice for introducing this new documentary. 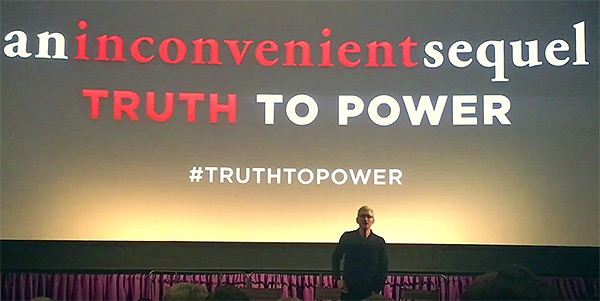 Additionally, Al Gore, who is a staunch advocate for action to be taken to combat the global climate change crisis, also happens to be Apple’s board member and so he clearly has deep rooted ties with the company. His extreme passion for the advocating the need to battle climate change is something that is close to the heart of Tim Cook as well.

As part of his opening introduction to the new documentary, Cook tried to put a positive slant on the topic by proclaiming there were positives to take from the situation even though there are signs “all around us of the climate crisis.”

With regards to that positivity, Cook remarked that “almost every country” in the world had already committed to putting measures in place for combating climate change, and those same countries had also agreed to some measures looking to reward the use of renewable energies by homes and businesses located on their shores.

There’s also an increasing focus on the development of new, cutting-edge technologies that can be adopted around the world for pushing the renewable energy agenda, and making it as easy, efficient, and as affordable as possible for renewable sources to be used over fossil fuels.

Of course, Apple is a world leader in this from a business perspective. The company’s new Apple Park campus will be 100% powered by renewable energy, with Al Gore quick to praise the business for that achievement, and for its use of renewable energies throughout the world which also led to Greenpeace recognizing Apple as the ‘Greenest Tech Company’ on the planet for the third straight year.

For those who are a fan of Gore’s work and stance, An Inconvenient Sequel: Truth To Power will be opening in theaters this coming July 28.