Samsung’s ads have been known to be a little weird in the past, and its press events can be just as bad. Lest we forget the infamous Gangnam Style moment that led to a Bollywood actor prancing around on stage like Psy. For a company so large, you’d think it could afford one or two advertising specialists wouldn’t you?

The latest ad to not make a lot of sense is entitled ‘A modern day love story’ and features a guy and a gal. That may sound lovely, but things take a turn for the creepy pretty quickly.

See, the young man featured owns a Galaxy S4 and, predictably, he likes using it. He liked using it so much in fact that he begins to take photos of his latest crush. Problem is, he’s doing it without her knowing.

So, throughout the spot we see the lovelorn youth snapping the unwilling lady whilst she’s in class, or in the library. That’s his modus operandi by day, but by night he sits and applies photo effects to her using the Galaxy S4’s super swish camera software. 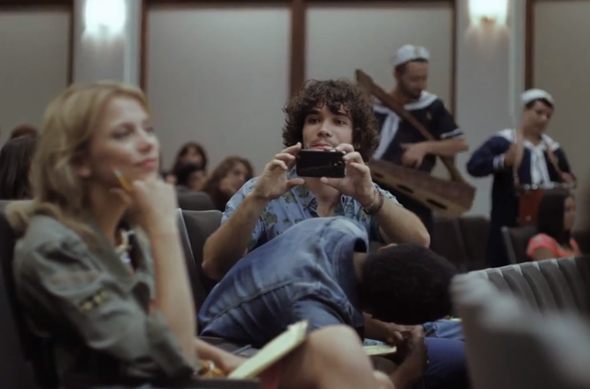 Eventually the little boy that could finally plucks up the courage to talk to his unwitting conquest where, thankfully, it turns out she’s also rather keen on him. Off they go to live happily ever after, assuming she never finds his impressive stash of candid photos, that is.

As far as ads go, it’s pretty weird. As far as Samsung ads go though, it’s par for the course at this point. Regardless, someone somewhere must like them and it sure doesn’t seem to be harming the company’s standing with customers. The Galaxy S III sold like gangbusters, and it’s fair to say that the S4 will do just as well, if not better. Even if the ads are a little off.

Still, it’s nice to see Samsung running an ad that actually pushes its own hardware more than it bashes that of its competitors, which is something Samsung is known for. We’re certainly no budding Don Drapers though, so we’ll leave the advertising tips to someone else!