Jailbreak Legend Geohot Gets Funding For His Self-Driving Car Startup

You may remember that towards the back-end of last year we brought you the rather obscure news that famed iPhone hacker George Hotz (also known as Geohot) was getting involved in the autonomous vehicle space. After stepping away from jailbreaking iPhones and finding exploitable vulnerabilities in Sony’s PlayStation 3, and taking numerous other jobs and internships at big companies, Hotz has set up a company called Comma, with the intention of attempting to pioneer artificially intelligent self-driving vehicles. It was generally classed as a laughable notion that Geohot would go up against the likes of Google and Tesla Motors in attempting to build an intelligent autonomous car, but new reports are suggesting that Hotz has secured investor funding for his new passion.

As is often the case in The Silicon Valley, successful startups are often founded off the back of an insane idea that no-one could ever think would become a reality. In the case of George Hotz, Comma was put in place after the former iPhone hacker placed a bet with Tesla Motors CEO Elon Musk that he could build a better self-driving system than the one that Tesla had in place at that time through the services it pays for from Mobileeye. That bet – and the employment deal that went hand-in-hand with it – quickly fell through when Musk tried to protect himself and his company with a way for Tesla to back out of the contract. 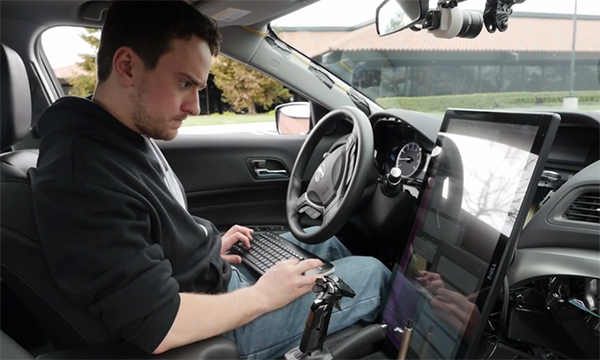 As they say, history is history, and the future seems to be bright for Hotz and Comma. The company has put the necessary components in place, and has demonstrated its technology to the point that it has managed to raise seed investment from venture capital firm Andreessen Horowitz. That initial seed investment not only places confidence in the startup, but also essentially values the company at around the $20 million mark. Not bad for a company that was founded on the back of a bet by a guy who released a rap video on YouTube as part of a legal retort to one of the world’s largest entertainment company that was suing him at that time.

Hotz has also managed to build a fairly impressive team in his pursuit of autonomous vehicle excellence. Along with himself, there’s Yunus Saatchi, who has a PhD in artificial intelligence. There’s Jake Smith who has impressive pedigree in the Bitcoin community, along with fellow Bitcoin aficionado Elizabeth Stark. Hotz also has rather ambitious plans to expand the team over the next three months, with plans in place to acquire individuals with skills in machine learning and consumer hardware fields.

With no prototype in place yet, Hotz believes that Comma will be able to deliver something by the year end, and that the eventual goal “is to be a software-provider for car makers and auto suppliers.”