The recent news that iPhone jailbreak pioneer George Hotz has been working on self-driving car technology was a big deal, and part of that story was that he claimed to be able to outdo the software used by car manufacturer Tesla, with the company having recently pushed a software update to some of its cars that allows them to drive themselves under certain conditions. The technology worked by Hotz uses off-the-shelf parts and would apparently give the software Tesla uses a run for its money, something which Tesla itself has decided to refute.

In a blog post that was circulated by Tesla’s CEO Elon Musk, the company has set about suggesting that Hotz’s tech isn’t all that impressive, suggesting that if anyone was capable of producing something better than Tesla’s software, then they would do just that. Tesla also takes issue with the test that was carried out for the recent Bloomberg article that started all this, saying that driving on a known stretch of road isn’t really a good test of technology that needs to be able to drive safely on any road, anywhere.

We think it is extremely unlikely that a single person or even a small company that lacks extensive engineering validation capability will be able to produce an autonomous driving system that can be deployed to production vehicles. It may work as a limited demo on a known stretch of road — Tesla had such a system two years ago — but then requires enormous resources to debug over millions of miles of widely differing roads.

It also appears that claims in the original article that Tesla’s autopilot software was created by an Israeli company may not have been 100% accurate, with Tesla reiterating that it was created in-house.

We should also clarify that Tesla’s autopilot system was designed and developed in-house. Were this simply a matter of repackaging a vendor’s technology, as claimed in the article, we would not be unique in offering this groundbreaking experience in production vehicles. If other car companies could meet or exceed the Tesla product by buying an off-the-shelf solution, they would do so. 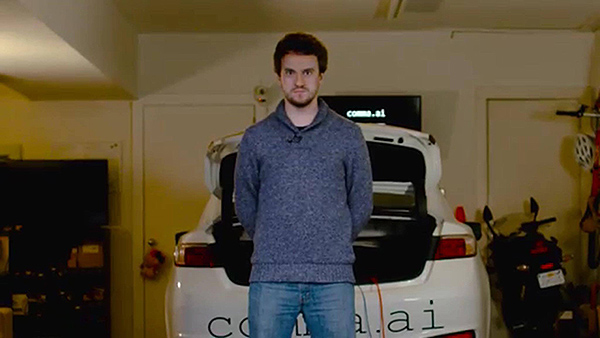 At this point it is becoming increasingly clear that there is no love lost between Tesla and George Hotz, and even the author of the original piece appears to have history with Musk – Ashlee Vance published a less-than-kind biography of Musk earlier this year – so it’s difficult to see just where this story will go. While there is no doubt that George Hotz is a super-clever guy, is it really feasible for him to take Tesla on at a game it no doubt has quite a team working on?

Now we await the next installment!