The Evasi0n untethered jailbreak for iOS 6 / iOS 6.1 is tantalizingly close now, and with Sunday’s almost certain release date fast approaching, the Evasi0n website has been updated once more. Touting the process of preparing the jailbreak tools for public consumption as 75% complete, the Evad3ers team has now begun rolling the Windows and Mac tools to a private pool of beta testers.

Although we tend to find ourselves gripped in the run-up to any major jailbreak release, the Evad3rs team – comprised mainly of experienced jailbreak devs – have turned the release of the 6.1 untether into something of a pantomime. This tactic has successfully heightened general interest, and with 75% of the pre-release formalities out of the way, the as-assumed Super Bowl Sunday release looks a certainty:

75%: Linux version is still on the works. Private beta testing has started for OS X and Windows. Come back soon! 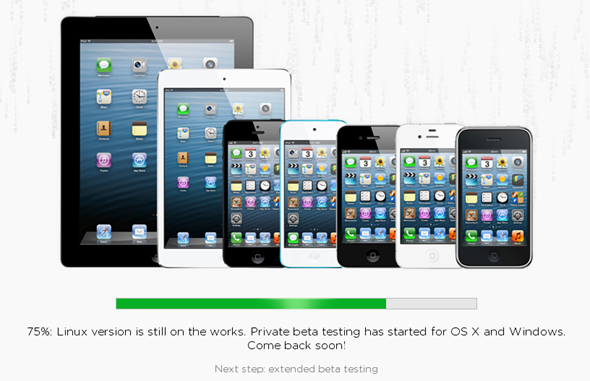 Pod2g also took to his Twitter account to confirm that the team is now really close to release:

Pod2g: Planetbeing latests posts on reddit regarding that subject. They are really interesting. We’re close to the release! Stay tuned!

The jailbreak, as we have already learned, is compatible with all versions of iOS 6 released hitherto, and supports every device on which the latest release of Apple’s firmware can run. So, once the tool is ready and released to the anxious public, every iPhone from the 3GS upwards, every iPad from the iPad 2, and the fourth and fifth-gen iPod touch will all be jailbreakable – provided they are running some variety of iOS 6.

There are a couple of reasons why this jailbreak has generated quite a bit more hype than other recent jailbreaks, notably the fact that it has taken quite a while following the September release of iOS 6. For a while, it was looking as though we may never see a jailbreak for iOS 6, but credit to the veterans of the jailbreak scene – they have come through and delivered the goods once more.

The untethered nature of the jailbreak means one will not have to connect to a computer every time a device is rebooted or turned off, which makes this jailbreak all the more appealing.

As time has progressed, the tools released for purpose of jailbreaking have become more elegant and user-friendly, and although we anticipate more of the same this time around, we’ll have a relevant guide on hand to help you along the way.

We will also be sure to keep you updated should we hear any further updates with regards to the state of this jailbreak, so stay tuned to our coverage here at Redmond Pie!