iPhone 4 Houses 512MB of RAM, Twice than that of iPhone 3GS and iPad

The title says it all. MacRumors has confirmed that the new Apple iPhone 4 features 512MB of RAM, which is equal to the likes of Nexus One, EVO 4G and HTC HD2 (HD2 has 576MB RAM), but twice than that of iPhone 3GS and iPad. For those of you who don’t know, the original iPhone (2G / EDGE) and iPhone 3G had 128MB RAM, iPhone 3GS had double i.e. 256MB of RAM, and so did iPad. But with iPhone 4, Apple is taking the strides by doubling the RAM to 512MB.

Here is a image proof from one of the sessions from WWDC 10 on Advanced Performance Optimization. 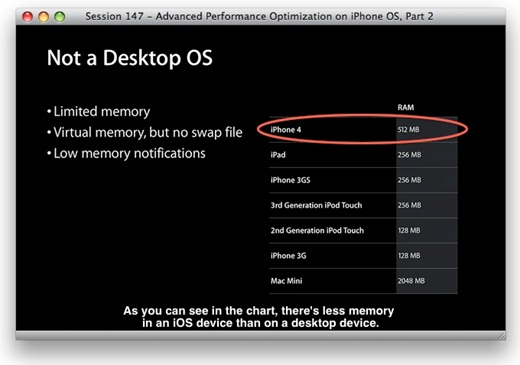 iPhone 4 was announced earlier this month at WWDC 10 by Steve Jobs in front of packed audience at Moscone Center, San Francisco. It is available in white and black, with price tag of $199 for the 16GB model and $299 for 32GB. [via Guida iPhone]