We have already seen iPads recently getting fixed into different car dashboards. But now, iPad will be moving not only on roads with you, but also into skies with Bluebox Avionics’ new Ai IFE system. 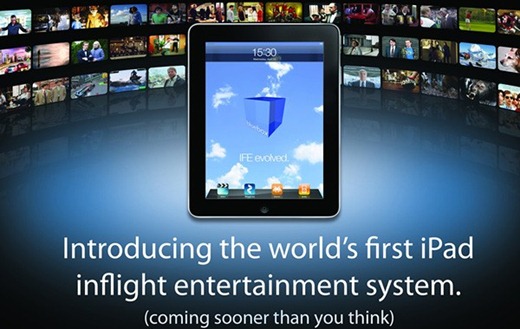 Due to induction of long range aircrafts like Airbuses, Boeings 777 and 787, in-flight comfort and entertainment is getting high on list of priorities of these Airlines during the long distance flights. From this July, there will be a new point of differentiation between airlines regarding the in-flight entertainment systems which they will have on offer. Bluebox Avionics’ Ai IFE (in-flight entertainment system) now includes Apple iPad with preloaded content and apps for passengers to play around while they travel thousands of kilometers in clouds. Rentals of each handheld will be around $10 per flight.

The selection of iPad as an in-flight entertainment system was based on its leverages of power, flexibility and quality of the most advanced consumer device ever produced.

Some of the features of this new IFE system includes:

• full range of games from the iTunes App Store

• eBooks as available in the App Store

• custom apps built for your airline

• and a selection of over 200,000 commercial apps available for iPad

It is being said that one major international carrier has already signed up for this, and more are expected to follow the trend soon. [via Engadget]