The iPhone Dev Team has just released a near final version of Redsn0w 0.9.5 for both Windows and Mac. This beta release, like all the previous ones is meant for iPhone 3G and iPod touch 2G only, running iOS 4 (formerly iPhone OS 4). Apart from multitasking and wallpapers support on iOS 4.0 on iPhone 3G and iPod touch 2G, this version also brings support to enable battery percentage which otherwise is disabled by Apple. 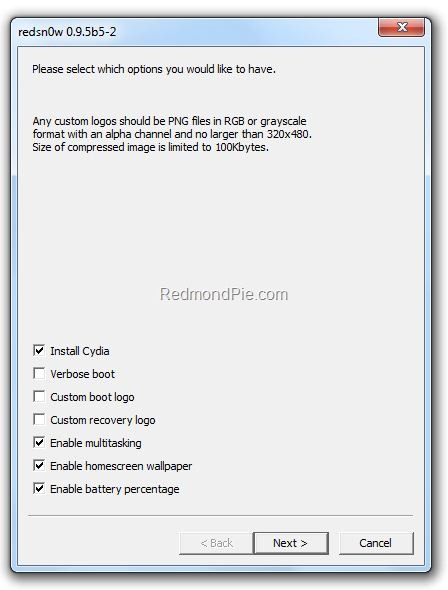 Note: Once you enable battery percentage, you actually toggle it off and on via Settings→General→Usage.

Warning Note: This release is strictly meant for official activated iPhones, if you rely on an unlock, stay away from this release.

Instructions to jailbreak iPhone 3G and iPod touch 2G on iOS 4.0 GM using Redsn0w 0.9.5 as usual are exactly similar to the last release. Please read all the instructions posted here carefully before upgrading and jailbreaking your phone on iOS 4.

If you are on iPhone OS 3.1.3, you can follow our step by step guides to jailbreak iPhone 3GS with Spirit here, iPod touch 3G untethered here, and iPad on OS 3.2 here.

Apple is all set to release the final version of iOS 4 on Monday, followed by first of iPhone 4 devices that will ship next week (June 24th). Final versions of these jailbreaking and unlocking tools for iOS 4 / iPhone 3.1.3 on 05.12.01 baseband can be expected right after the said devices have been released. Stay tuned as will update you, with complete how-to guides whenever they are available for download.