The third-pre release build comes over a month after Apple initially introduced and subsequently released iOS 10 beta to the world during this year’s Worldwide Developers Conference (WWDC 2016) week back in June, and about two weeks after Apple released beta 2 to developers registered on Apple Developer Program and first public beta to testers registered on Apple Beta Software Program. 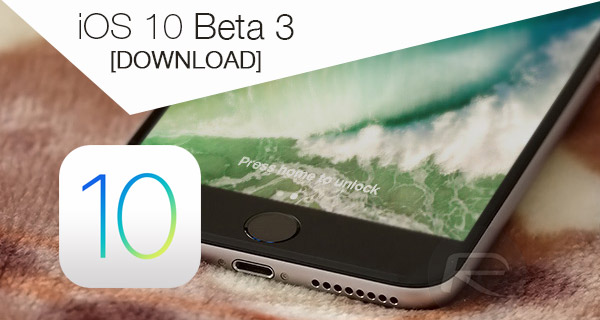 Of course, that public availability means that Apple instantly has more people stress testing the platform and reporting issues, which ultimately means that bugs and potential issues stand a better chance of being reported and fixed in future builds. It’s a system that will hopefully result in an extremely stable iOS 10 come official launch.

As is to be expected, the first two betas of iOS 10 weren’t exactly what you could call public ready, meaning that they both contained a number of bugs and stability issues that had sometimes forced installed devices to crash or reboot without any type of warning. iOS 10 beta 3 looks to not only continue the development of the platform, but also eradicate the known bugs and improve the general stability and security of Apple’s next major iteration of iOS. iOS 10 beta 3 goes some distance in actually achieving that roadmap.

Apple has always done an impressive job of getting firmware ready for an official launch at the same time as tying to support and provide access to as many legacy devices as possible. That has sometimes worked to the detriment of users who have experienced issues with the latest firmware release on older devices that are lacking in processor power. You can check out the complete list of iOS 10 compatible devices here: iOS 10 Beta Compatibility For iPhone, iPad, iPod touch.

As always, any developer with a previous pre-release seed of iOS 10 on their device, or anyone with Configuration Profile installed, can head over to the Software Update mechanism in Settings right now to get the latest developer seed. For the uninitiated, simply launch the Settings app and head over to General > Software Update to get to the new beta 3 release. 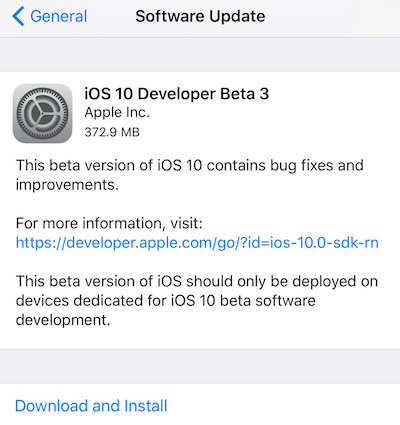 Beta 3 seed is currently not available to public beta testers but it’s only a matter of time before Apple makes it available to those registered on Apple Beta Software Program. We will let you know when that happens. Stay tuned.

We will also of course update as necessary if any feature additions or outward-facing changes become apparent with this latest beta of iOS 10.