If you got excited with the launch and took the opportunity to immediately get your hands on iOS 10, but have subsequently discovered that it is causing issues on your older hardware, such as battery drain or performance related, then you’ll be pleased to know that the problem can be rectified with a downgrade back to an older firmware release. 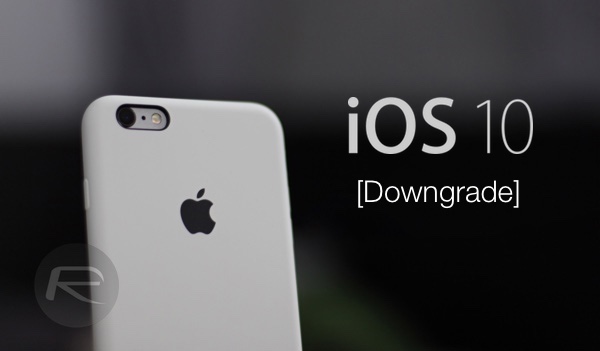 Since Apple is still digitally signing iOS 9.3.5, and we bet they might continue doing so for a while given iOS 10 is a major release, it means that anyone who has upgraded to iOS 10 still has the ability to roll that firmware back to iOS 9.

Here in this guide, we’re going to walk you through the complete steps involved in that, but take heed, next time don’t be so impatient installing an update of a major iOS release on the launch day. It’s always better to wait a few days to see if no major issues are reported and update only after it’s known to work well for others.

Step 1: First of all, you’re going to make sure that you’ve upgraded to the latest version of iTunes on your Mac or Windows PC.

Step 2: Download iOS 9.3.5 IPSW file that has been readied by Apple for your specific iPhone, iPad or iPod touch model.

Step 3: Make sure to turn off the Find My iPhone feature on the device. Navigate to Settings > iCloud > Find My iPhone, and make sure that the toggle is moved to the Off position.

Step 4: Connect the iOS device in question to your Mac or PC via the provided cable. and then launch iTunes.

Step 6: In the iTunes interface, within the options for the connected device, hold the Option key on the Mac, or the SHIFT key on a Windows machine, and press the “Restore iPhone…” button.

Step 7: When prompted, locate and select the iOS 9.3.5 firmware file that was downloaded as part of step 2 above. iTunes will then go about its business and go through the process of installing a fresh version of iOS 9.3.5 to your device.

Step 8: Do not unplug the device from the computer until iTunes has successfully confirmed the restore and the device has rebooted into the welcome screen.