It’s one of those days again when Apple sees fit to flip the switch on a slew of updates for a number of its popular platforms. Today sees the release of the third betas of macOS Sierra 10.12, watchOS 3 and tvOS 10 for all compatible devices.

Anyone with access to the relevant privileges to download the pre-release seeds can do so right now, and of course, there’s more information below about the changes made across all three platform with beta 3. 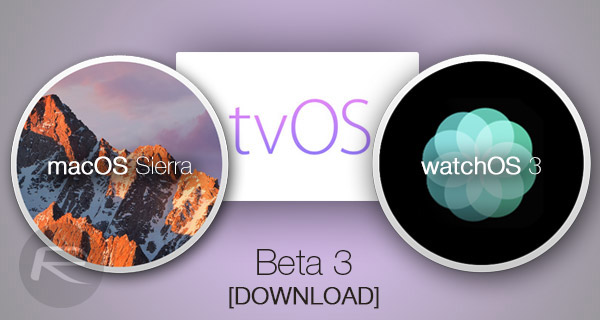 Apple was very clear during this year’s WWDC that the future of OS X is macOS, and the immediate future of macOS Sierra is right here in the form of a third developer beta. As expected from a third beta, the third pre-release seed of macOS Sierra focuses on attempting to improve the overall stability and performance of the new experience that will ship for Mac computers this coming September. Rather than applying engineering resources into adding in outward-facing changes and features, Apple’s macOS team has continued to streamline the platform to try and ensure that the Sierra hits the ground running with an extremely positive user experience.

For those that are currently running the first or second beta seeds of macOS Sierra, Apple has made this third pre-release seed available as an immediate over-the-air download via the Mac App Store. If you’re an active enrolled member of the Apple Developer Program, you can also grab the OS installation file directly from Apple’s servers.

The watchOS 3 reveal was one of Apple’s triumphant moments during last month’s Worldwide Developers Conference. watchOS 3 represents the next step in the progress of the watchOS platform, with Apple now making watchOS 3 beta 3 available to developers. Each individual Apple Watch owner or developer will likely have taken something different away from the WWDC announcements, but this latest version ensures that all of those announced features continue to be streamlined and enhanced to be as performant as possible when watchOS 3 eventually drops to the wider public. As is usually the case with this type of roadmap, rather than focusing on introducing outward-facing changes Apple is taking the performance and optimization route with beta 3 to ensure a seamless user experience.

watchOS 3 beta 3 is available immediately and can be installed to the device using the Software Update mechanism in the Apple Watch app on a connected iPhone. If you don’t have watchOS 3 beta 1 or 2 installed, you will first have to grab the update by installing the configuration file from developer.apple.com. This of course requires you to have an active membership of the Apple Developer Program.

tvOS is undoubtedly one of Apple’s most exciting platforms due to the fact that it’s trying to reinvent the living room on a very immature platform. Rather than taking inspiration from other platforms and firmware that have pioneered this market, Apple is having to see what fits and is attempting to walk its own path and craft itself as the industry leader. Earlier versions of tvOS 10 have already introduced a new Dark Mode, more advanced powerful Siri integration, and even security advancements like Single Sign-on for streaming apps. Rather than looking to confuse the landscape with additional features, Apple has once again chosen to try and streamline the experience as much as possible with bug fixes and performance enhancements.

To get up and running with the tvOS 10 beta 3 update, if beta 1 or 2 is already installed, you can grab the update directly from Apple TV itself, otherwise you will first have to grab the update from developer.apple.com.