The first American 4G phone, the HTC EVO 4G will hit the shelves on 4th of June for US $199 on a two year contract with Sprint. Since both the HTC HD2 and HTC EVO 4G shares almost same specs (hardware wise), the comparison between the two is evitable. One runs on Windows Mobile 6.5 (HTC HD2) while the other runs on Android 2.1 with HTC Sense (EVO 4G). 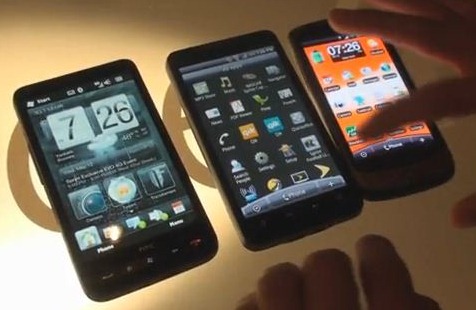 The guys at Pocketnow recently got their hands on the EVO 4G, and shot a little video comparing it with HD2 and Nexus One: showing the difference in network speeds (between 3G and 4G), camera, size, among various other things. Since New York doesn’t support 4G network at this moment, the EVO 4G was using Sprint’s 4G hotspot which was created outside in a truck of the event’s premises. Due to this, it lacked the speed which the 4G network promises. You can check out the video and see it for yourself.

Which one do you prefer now? the HTC EVO 4G running Android, or the HTC HD2 running Windows Mobile on a 3G network? [via PocketNow]